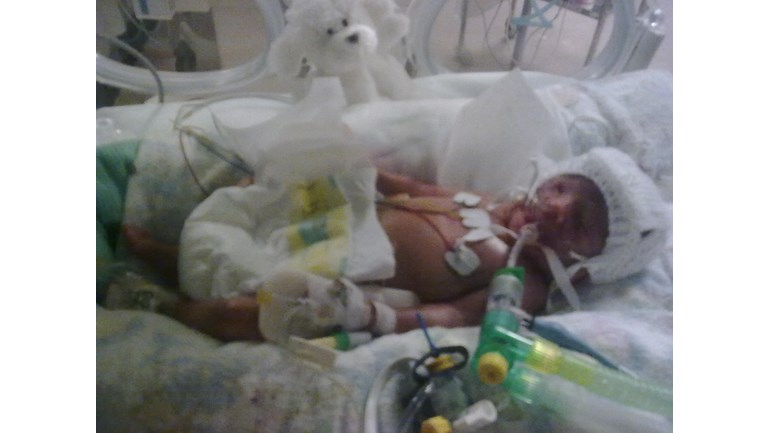 I am running the Virgin London Marathon on 24.04 for The Luton and Dunstable Hospital Charitable Fund because I want to say thank you to the L&D NICU!

On 19th January 2010 I was 26 weeks pregnant when I went into labour unexpectedly. I gave birth to my beautiful daughter Catrin at 9am via emergency c-section to save both of our lives. My beautiful daughter was born at 2lb 5oz with no signs of life, but the doctors somehow managed to bring her back to life and she was immediately transferred to the NICU at the Luton and Dunstable Hospital.

After less than 48 hours Catrin was given no hope of survival as she had suffered complete organ failure and a massive brain haemorrhage. I had to say goodbye to my beautiful daughter as there was nothing further that the doctors thought they could do and she was not expected to make it to the end of the day.  Thankfully Catrin was stronger than anyone could have hoped and she fought.  Her rally for life meant that the doctors and nurses of the NICU fought with and for her and we began to have hope.....

Catrin was cared for by 4 different hospitals in the 3 months she was in hospital but without the dedication, patience, professionalism, and love of the staff at the L&D NICU Catrin would certainly not be here now, 6 years old, and thriving. The L&D NICU was the least funded of all the hospitals who cared for my beautiful girl, and they crammed babies into every corner of their cramped NICU because they knew that without their help the tiny babies, for whom they care,  would stand no chance of survival.

I will never forget what they did for Catrin and I can never express to them the thanks that I feel and the love that I have for those who fought to help Catrin pull through.  I am crying whilst trying to type this.....

Please, if you can spare anything at all, I would be so grateful to be able to say thank you to the NICU and enable the unit to give other babies a chance to fight, to have a life as they have allowed Catrin to have. And, just for your information, any money I do manage to raise will be given directly to the NICU and not the general L&D hospital fund. . .

The Luton and Dunstable Hospital provides a wide range of general and specialist services to 350,000 people. All money raised by the charity allows the hospital to enhance it's services and provide a safe and more comfortable environment for our patients and their families.