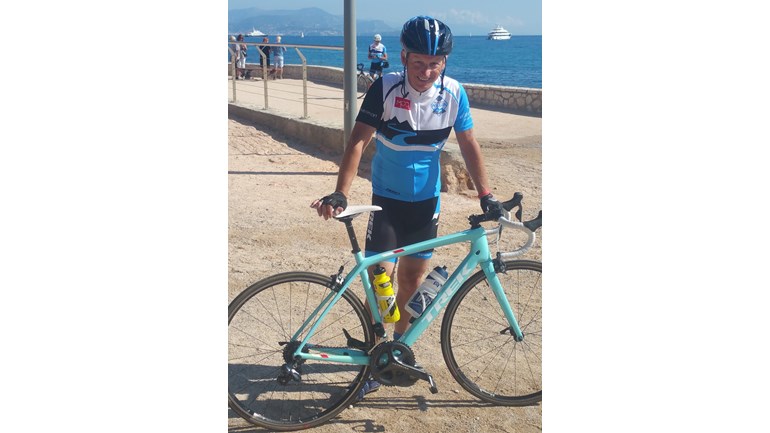 I am a reasonably competent cyclist but I have a funny feeling that this challenge will stretch the limits of my own personal human endeavour to breaking point.

Willen Hospice is one of those great local charities that unfortunately so many of us here in Olney and the surrounds are now all too familiar with,  having seen family members or friends pass through their caring doors.

My initial fundraising target, personally, was to raise a minimum of £1000.00 but this was achieved and was subsequently raised to £1500.00. That was achieved and a new total of £2000.00 was set.  That total has now also been surpassed, so the bar has been set higher at £2500.00.  A larger group target of £100,000.00 has been set that is being chased down by a collective of fellow cyclists and non-cyclists alike as we train hard for our ride from Paris to Nice in September covering 750 miles in a little over 7 days and taking in the mighty mountain peaks of Alpe d'Huez and Mont Ventoux as we traverse south to Nice.  If you are unfamiliar with these two climbs I suggest a quick internet trawl to get some idea of the task ahead for all involved.

On a personal level I hit a milestone birthday earlier  this year (2015) so this ties in neatly with that by giving me a worthwhile challenge for my 50th year.

The training will be life changing as I want to be fully prepared to succeed.  Virgin Active Riverside, Northampton gym has been my second home as I parked up and pedalled a Wattbike through the winter and the horrible wet days whilst the roads of middle England and Ireland have become very familiar through spring.

Please be kind and sponsor my efforts and those of the group as we start to wind up the efforts as September 19th grand depart draws near.

Massive thanks to anyone that lifts their elbow and commits some money to this unbelievable local cause.

Willen Hospice is a charity based in Milton Keynes. It provides complex and individual care to terminally ill adults and support for their families and friends. The care is assuring, equally accessible and advanced. It is free to the patient and provided by a highly skilled team of professionals.