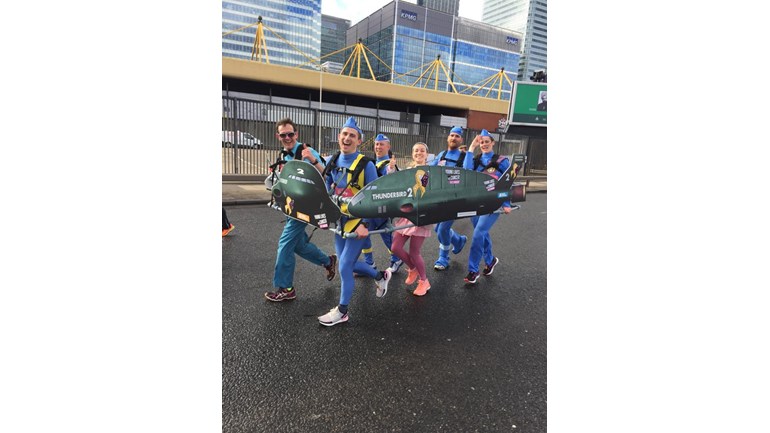 On Sunday 28th April 2019 a team of 6 Police Officers from The Met will be attempting to smash a Guinness World Records title for the fastest marathon in a 6 person costume!

We are raising money for CLIC Sergent - The UK’s leading cancer charity for children, young people and their families. They fight tirelessly to stop cancer destroying young lives and help the whole family deal with the impact of cancer, it’s treatment, life after treatment and in some cases, bereavement. Please help us reach our £6000 target.

Rob Jones as Brains - Marathon veteran and a previous marathon world record holder as part of the legendary Human Centipede team (since beaten by Princess Beatrice). The ‘brains’ of the team and it’s evident why he’s several ranks above his team mates.

Helen Smith as John Tracy - First time marathon runner and head of fundraising for this event. Will do anything for anyone - the most selfless person you will meet.

Andy Moulden as Scott Tracy - Has a marathon under his belt. Is terribly unorganised but strong, fit and ready to take on the world one mile at a time.

Dave Brennan as Alan Tracy - The comedian of the team who will have us laughing to the finish line. Has completed a marathon and is ready to hit the streets again to raise money for a great cause.

Thank you in advance for your donations for this amazing charity.

This attempt would not be possible without the support of our family and friends as we train hard to achieve high and get ready for LIFT OFF!!!