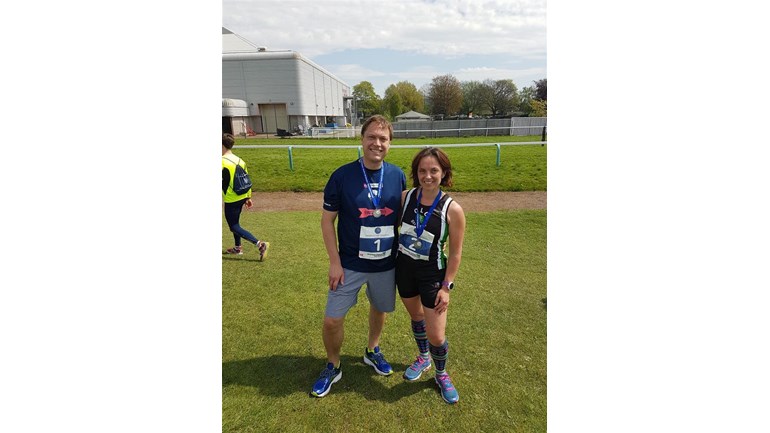 Emma and Philip's Hereford Half

We offer a range of services to people with terminal illness

Thanks for taking the time to visit our JustGiving page. We both completed the Hereford half marathon in under 2 hours, despite unexpectedly hot conditions, and despite the recurrence of Emma's toes injury.

On 20 July 2015, Hannah Hotston (née Woor) died at St Michael's Hospice near Hereford. Hannah was a close friend of ours from undergraduate days, and was a bridesmaid at our wedding. She matriculated in 1992 at St John's College, Cambridge and served as Master of the Cambridge University Guild of Change Ringers from 1994-95. The Hospice gave Hannah palliative care during her last weeks, including attempting to organise one last family BBQ with us on their premises, when it became apparent that Hannah would not manage the journey to our house.

In early 2013, in the aftermath of her surgery, Hannah signed Emma up for the 5k Race for Life that summer. Emma could at this point barely run round the corner! They walked the course, as Hannah was between bouts of chemo, but less than 3 months later Emma ran her first half marathon, and both of us are now regulars on the 13.1 mile circuit.

St Michael's Hospice have organised a half marathon around Hereford as part of their fund raising plans, and ask each person to try and raise a minimum of £30 – that’s only asking 6 people for £5. But there's two of us, so that's £60 minimum we're after, and we really think we ought to be able to exceed that by several £100!

The Hospice will be grateful for whatever you can spare, more information is available on their website at http://www.st-michaels-hospice.org.uk/event/hereford-half-marathon/.

We provide a range of services in Herefordshire and the surrounding area to people living with a terminal illness. Care is free to patients, their families and carers. This is thanks to supporters taking part in events, visiting our shops, playing our Lottery, donating and leaving gifts in wills.