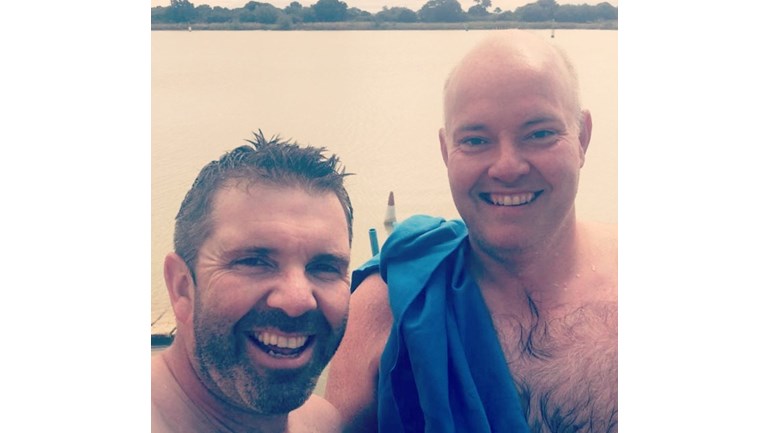 Jordan vs Brown - Clash of the Titans

Ben has triathlon pedigree having completed 2 previous Ironman events in his lifetime.  Adam has not completed a triathlon yet but is keen in his new found form.

After the monumental effort of the ICU Coastal Challenge comes a very different prospect.

Having carried each other round, over and under the Tough Mudder in 2016, Ben and Adam return to slug it out around the Cotswolds on Saturday August 5th.

All support on the day or with your donations is gratefully received.  Have a little bet on who will win quoting JORDAN or BROWN!!!!

Dr Guy Jordan, Consultant in Anaesthesia and Intensive Care medicine, was an experienced cyclist who died at Frenchay Hospital following a collision with an oil tanker in November 2013.

Dr Jordan worked at Frenchay Hospital but was instrumental in the design and planning of the new Intensive Care Unit at the new Southmead Hospital which opened in May 2014.

Southmead Hospital Bristol is one of the UK’s Major Trauma Centres, covering an area which incorporates Bristol, Bath, Gloucestershire, Wiltshire and Somerset.

His family and colleagues set up the fund with Southmead Hospital Charity to support those areas of the hospital in which Guy worked - Theatres, the Emergency Department and Intensive Care.

The long term aim of the fund is to make a real impact on these departments  - funding the purchase of state of the art training equipment, advanced medical kit and additional patient services like a Major Trauma Bereavement Service.

We want to make healthcare better for our patients today and in the future by funding innovative, nurturing and supportive projects that transform local NHS services Southmead Hospital Charity is the working title for North Bristol NHS Trust Charitable Funds, Registered Charity No.1055900

Charity Registration No. 1055900
Find out more about charity fundraising