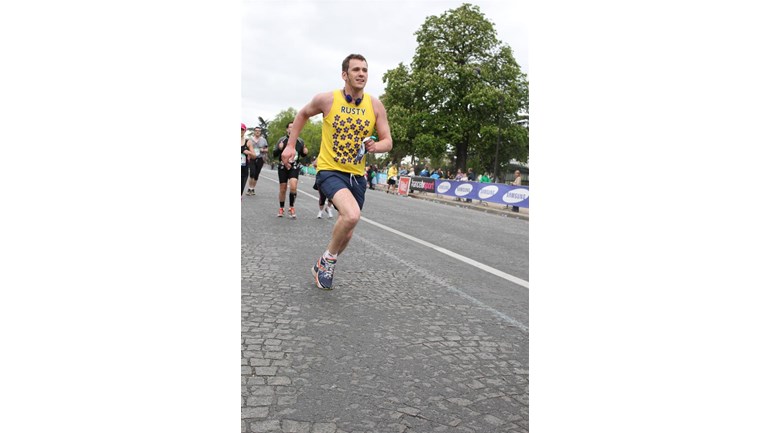 I have selected to run the paris marathon to donate all my sponsorship money to Lymphoma Association - which is an amazing charity to donate towards , i have learnt this first hand.

I firstly got the symptons after a night out in February 2012 - which consisted of  chest and back pains and as lump was starting to appear over the next few days just above my collar bone,this led to me visiting the hospital for X-Rays with no signs of anything - then after a good few days of waking up in the middle of the night in real pain i visited my doctor  and he advised me to see a specialist for some tests to rule out cancer!

This was quite possibly the biggest shock i ever had,so after visiting the specialist it was confirmed that i had cancer and the next few weeks were quite worrying  but i decided to take the approach of there is always someone worse off than myself and that i was going to fight through it, no fear!!

at the end of the day there is nothing you can do to stop it your only going to worry yourself so get on with it - keep those positive thoughts,a very strong mind and determined attitude!

within 2 weeks after several scans - hospital visits and tests i had the operation for my  Biopsy then a further 3 weeks later - after that came the bone marrow biopsy - OUCH!!! that was serious pain i have never had pain like that but with that pain came some really good results - that the cancer had not spread into my bones and i would start Chemo within 2 weeks!

Going through Cancer was by far the most challenging period to date in my life. I would be lying if i was to say it was a breeze as there were real challenging days, however battling against a life threatening disease has made me stronger than ever!

Through treatment i was extremely impressed with the  phenomenal care that i recieved at Kingston hospital and also at the  royal marsden units i visited.

I had always said that through the treatment i wanted to give something back to support the charity that cured me, and now i am as healthy and in shape as i've been in the last 3 yrs - fully focused ,commited and determined.

I have been given a second chance, where so many people don't make it, i even met a few along the way that could be treated but not cured - thankfully i did so this is for my family,special people who were there for me (you know who you are)friends, work colleagues and nurses and specialists who were amazing throughout and have all pulled together,Now I'm determined and passionate for this so sponsor me....anyone that knows me well enough will be fully aware i don't deal with half measures! =)

Training is up and down have been hampered with injuries since starting training in November however i am fighting fit  now, just 2 weeks away and so excited!! the Paris Marathon is the 2nd largest in Europe with 50,000 runners

I have really enjoyed the training a real life challenge eating sensibly and making sure i look after myself along with dedicated training , cannot wait to cross the finishing line and celebrate with my family! and a good few beers!

i have been completing  long runs from work in Chessington into London which has been amazing! 13, 15 and 19 mile runs through the London night and jump on the train home back to Kingston - Freeeeezing in my shorts and Vest!!! :)

Any donation would be greatly appreciated (however large or small) it's all going to a great cause. Lymphoma association is solely reliant on fund raising to support itself, its a non profit charity so every penny,pound and NOTE counts.