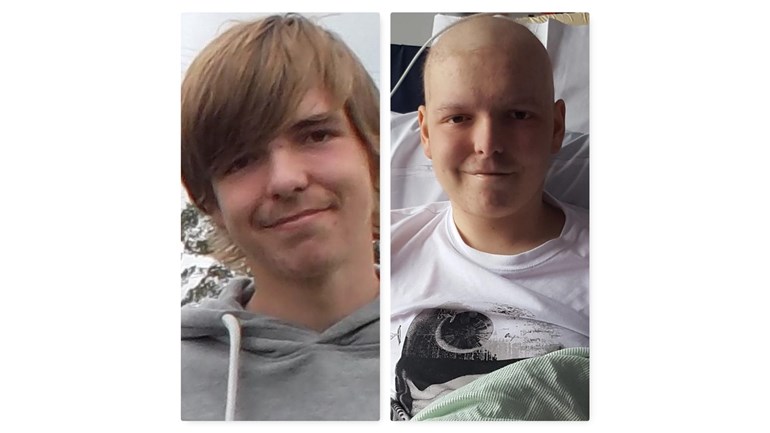 I am sure you are all aware of the sickness, the weight loss, steroids that makes you round out everywhere, the exhaustion, constant blood/platelet transfusions, long hospital stays due to infections/treatments, hair loss, many, many operations, needing feeding tubes, implants in the chest to give the chemo through, weekly injections (more than one) sometimes in very painful leg/arm muscles, weekly spinal injections and aspirations, that all come with cancer treatment.  With having Leukaemia Kieran also needed bone marrow samples taken. Kieran was also due to undergo radiation treatment but became too ill, because after all the chemo, the injections ,the steroids and suffering all the side effects it all still wasn't enough.  His Leukaemia came back more aggressively and spread into his central nervous system. Even though others saw a smile on his face many times he was a scared little boy who cried in my arms and just felt he couldn't take anymore at times.

I will skip to the part where the treatment finally pushed Kieran's body over the edge. He was having to have  chemo injected weekly into his spine to try and keep the Leukaemia in remission ready for a new treatment we had, eventually, won from a drugs company. This treatment had only been used on adults and was our final hope to get Kieran to a place where he could receive his bone marrow transplant. This treatment gave a 1 in 3 chance in adults - with someone of KK's age who knew, but the other choice was "nothing more could be done". It was a new auto immune treatment - the kind that needs more research - the most basic explanation is it goes into your system and "flags" the Leukaemia cells in the hope that the body's own immune system will start to fight them.  Unfortunately, Kieran's body had been so messed up by all the different treatments we were having to wait until he was strong and well enough to go ahead. At this point he had a feeding tube because not only couldn't he eat but he had constantsickness/diarrhoea due to contracting Clostridium Difficile Colitis due to all the antibiotics he had had to take for a different infection!! Are you beginning to see the nasty merry go round? Every chemical treatment to cure causes something else, then you treat that and you cause another thing! It never ends!

3 days after one of his spinal injections Kieran began getting very tired, sleeping for most of the day and night, and barely able to cope with more than an hour of activity. He then started thinking he said things to me but what came out of his mouth made no sense and it was just random words, then he started slurring. I kept being told he was just tired but I knew it was more.  The next day was the same but he could barely communicate and was getting frustrated.  The third day he couldn't talk or walk and opened his eyes only twice. The next afternoon he woke moaning in pain just pulling at his ear unable to tell me what was wrong - he didn't open his eyes once - but when his ear was looked into it was bleeding and they treated him through his drip for the pain. Still he just screeched/moaned and only my laying next to him soothing him could calm him. They took him that night for a CT scan where they could see white spots (which they thought to be caused by the Leukaemia at the time),  but no bleeding so we were reassured he'd get better. That night he pointed to his laptop (we were overjoyed thinking he was coming round) - but couldn't use his hands as they were just flopping and he got angry/frustrated and pushed it away. That was the last thing we saw him do. The following day I woke to his screaming/moaning - a sound I will never forget - and he was rushed for an MRI.  The news was devastating. The methotrexate they had been injecting into his spine to protect his brain had destroyed it.  I was told he would not survive the weekend, but he would be made comfortable with morphine and a drug that we could keep increasing to help him stay calm and settled. This didn't happen, instead Kieran screamed, writhed, moaned, hit out - but never once opened his eyes.  They had a specialist come and place electrodes on his head which was difficult as he pulled at them. Then more confusing news - but none that should have surprised us with our fighter of a son. He was fighting against the medication that was trying to sedate and relax him! He didn't want to give up - I got excited thinking he'd come back, he'd beat it - but no, it was made clear that he would not recover he just wasn't going down without a fight!  His Dad and I asked that we took care of him 24 hrs a day, the nurses helped but he was our child and we wanted to do everything for him, we bathed him, we turned him, we greased him, we had to suction his throat (and other care needs that for Kieran's dignity I will not write about), we lay with him, talked to him with the belief that somewhere in there he could still here us and we tried to pretend - and we asked all visitors to - that everything was ok incase he got frightened if he could hear that he was dying.  He actually managed to open his eyes two more times. Once when my best friends visited - he looked straight at them as if saying goodbye, and one final time when myself, his dad and all his relatives were in the room talking.  He even managed to shout MUM one last time. We were told somewhere in there his brain went back to a very primal function and the fact that I could soothe him with my voice and constantly laying with him showed he was still in there somewhere. Many other days past and I cannot write anymore except that no child should have to suffer this.  Kieran died in my arms and I was privileged to breathe in his final breath.

If we had the treatments that Kieran ( he was wanting to become genetic researcher himself)  believed that we could one day achieve in having - that no chemo/radiation/steroids is needed, but instead kinder therapies that help your body fight this terrible disease, other children would be spared so much!

What I have written is really not even a proper insight into what we went through - it would take a book!  But I truly hope it's enough to encourage you to help me raise money so that the Future Fund may one day ( very soon hopefully) realise the dream of discovering kinder, better treatments and other children will not have to suffer like KK did.