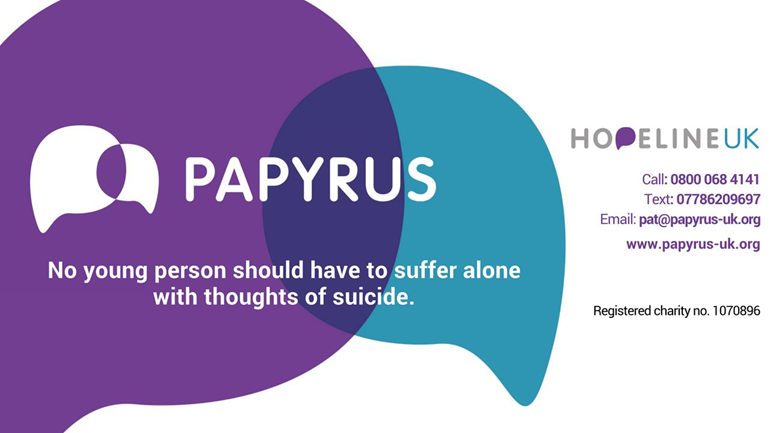 Thanks for visiting my fundraising page. In my work as a consultant psychiatrist I look after people who are at risk of suicide, and who have been bereaved by suicide. I have lost patients to suicide, and been affected by it in my personal life too. It is hard for me to imagine a more traumatic thing to happen, and I want to do everything I can to help reduce the chances of it happening.

I'm not a fast runner, but I have a real love of running. I've built up a tolerance to covering long distances, seem to recover quickly, and want to use those attributes to raise money for a good cause.

Papyrus is that cause. They offer young people (under 35) means of help if they are feeling at risk of suicide, like their telephone Hope Line, and also provide training courses to help groups of people to help others who might be at risk.

I started running in 2016 to lose a little bit of weight, get fitter, and to get some headspace in my time off. I had tried to take up running before but never really stuck at it due to injury and lack of a reason to keep going. But this time I built up to 10km and half marathon races, and my times gradually got quicker. My progress levelled off a bit but then I joined my local club (Headington Road Runners) and I have made a lot a new friends who have helped me train smarter and better. My family have been so supportive and sharing my successes with them is a big reason why I keep going. My marathon time has dropped from 3:38, to 3:24, and then to 3:15. I've broken 40 minutes for 10km and 1:29 for the half marathon. I love Parkruns and have just done my 50th. I ran the Race to the King (52 miles from Arundel to Winchester) in June 2018 and now I am ready to push myself harder.

Asking you to donate money to a runner for doing a single run wouldn't be that impressive, so I have made my challenge tougher than that.

I will be running four marathons in spring 2019:

These will be hard enough, but actually they'll only be training runs for three ultramarathons that I'll be tackling in summer, known as the Threshold Trail Series:

I am pretty sure this is going to hurt a lot, and it will require some careful planning, dedication and tenacity. But I hope it is enough to convince you to donate to this good cause.

I will post updates as my training and races take place so you can stay up to date with my struggles!

PAPYRUS is the national charity for the prevention of young suicide. We run HOPELINEUK 0800 068 4141 a freephone confidential helpline staffed by trained professionals providing advice, support & information to anyone who is feeling suicidal, or concerned that a young person they know may be at risk

Charity Registration No. 1070896
Find out more about charity fundraising