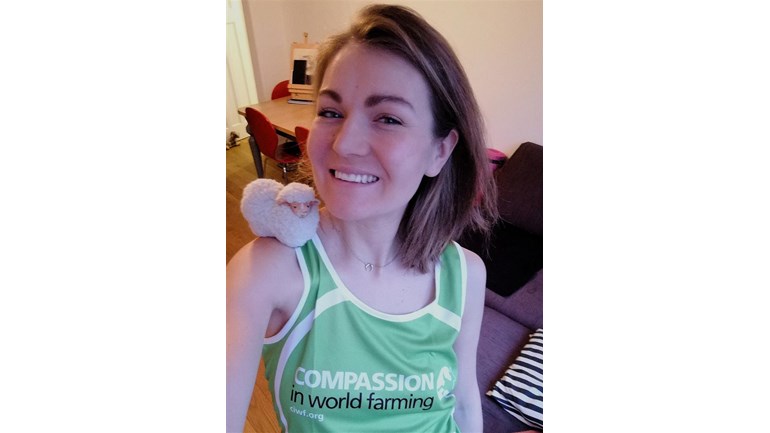 This 14th April I'll be running my first (and probably last!) marathon in Brighton. I'm raising money for Compassion in World Farming, which may seem a weird charity for a vegan to support. However, CIWF, a nonprofit who do tremendous work improving conditions for farmed animals, have always been close to my heart. It was CEO Philip Lymbery's books that first opened my eyes to the horrors of factory farming and their Extinction conference in 2017 cemented my mission to advocate for animals, eventually (I hope) as a full-time career. CIWF are also a strategic partner of University of Winchester's Centre for Animal Welfare where I'm studying my MSc.

I would love for all forms of animal farming to eventually end altogether, but meanwhile it's the hard work of organisations like Compassion in World Farm that is helping animals here and now.

Around two in every three farm animals are factory farmed: that's over 50 billion every year. These intensive systems put production above all else, creating vast quantities of seemingly cheap meat, milk and eggs. The animals pay the price, living in conditions that can only be described as hell on earth. CIWF put pressure on producers and suppliers to change this, with clearer food labelling, awards for higher welfare, and campaigns against some of the worst cruelties in these modern farming systems. You can read more about their work and success stories here: https://www.ciwf.org.uk/factory-farming

Please sponsor me what you can, to help CIWF help the animals. Or if conservation is more your priority, remember that factory farming is a major contributor to the climate change challenge, releasing enormous volumes of greenhouse gases. Deforestation to farm crops for animal feed or grazing also destroys the habitat of billions of wild creatures and devastates biodiversity. Whatever your motivation, your money will keep me running/jogging/crawling to the end!

Charity Registration No. 1095050
Find out more about charity fundraising