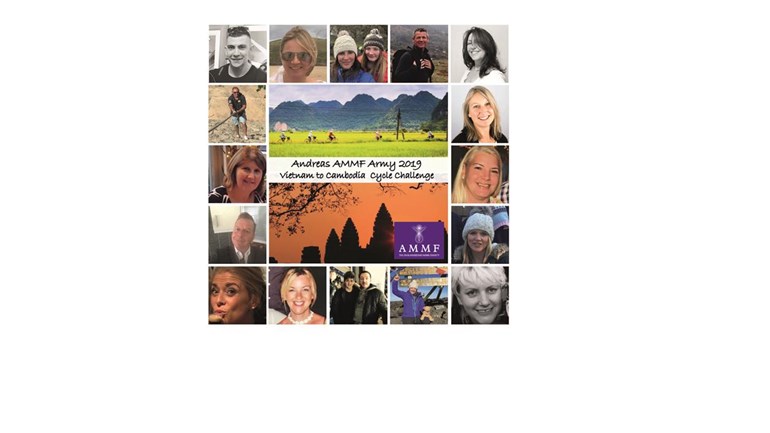 ﻿My name is Andrea Sheardown, I'm 46, married and have 3 beautiful children aged 16, 15 & 6. I would like to share my story with you to raise awareness about the deadly cancer called Cholangiocarcinoma and raise lots of money for The UK's only Cholangiocarcinoma charity called the AMMF.

In October 2015, my world was turned upside down when I was diagnosed with Cholangiocarcinoma (CC for short), a very rare form of bile duct cancer. It is known as one of the 'silent killer cancers', and has one of the worst survival rates of all cancers as it is difficult to diagnose accurately and early, so by the time of diagnosis is often to advanced for surgery - which is currently the only potential cure. I had been experiencing some severe pain and discomfort in my ribcage and initially it was put down to strained muscles, however on further investigation and X-rays a mass was detected on my liver. After initially been given just weeks to live I managed to defy the odds and go on to have major surgery to my liver in November 2015 to remove the cancer. This was then followed by 6 months of chemotherapy. At times, I was left feeling very ill and weak and in and out of hospital but giving up never entered my head!

This cancer is increasing across all age groups, including younger people, and the cause of this ongoing increase is unknown. Much more research is desperately needed. AMMF is the UK's only cholangiocarcinoma charity, dedicated to tackling this devastating cancer on all fronts: providing information and support, campaigning to raise awareness, and encouraging and supporting research.

Over the past 2 years with the help of my friends, I have organised lots of varied fundraising events, from Charity Ladies Nights, climbing The Three Peaks in the middle of winter, Firewalking and more recently (Feb 18) my ultimate challenge of climbing the world's largest free-standing mountain Mount Kilimanjaro! On February the 23rd 2018, myself and some of AndreasAMMFArmy reached the summit (19,341 feet)!

People and businesses have been so generous with their support, and all together so far we have raised over a whopping £28,000!

February 2019 is my next big mission - To cycle from Vietnam to Cambodia with some of my Kilimanjaro team and the new recruits to AndreasAMMFArmy, making us a strong team of 18 including my 16-year old daughter. We will all be self-funding our places so 100% of funds raised will go directly to the charity. This will be a massive challenge for us all, as some of us don't even own a bike yet! Many of my team have also been affected by cancer and have lost loved ones and wish to help me raise awareness and much needed funds for the AMMF Cancer Charity.

I'm continuing to have scans every few months and have been told this devastating cancer could come back at any stage, setting these challenges has helped me to stay positive and focused.

Keep checking our page as we will be planning some great fundraising events along the way before our big challenge itself!

Thank you so much for reading this story - Andrea and her AMMF Army!

Charity Registration No. 1091915
Find out more about charity fundraising