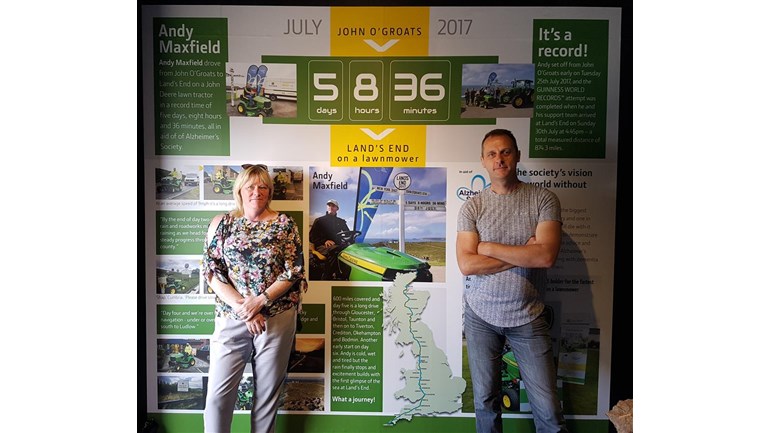 At the beginning of 2017 we decided to help raise money for The
Alzheimer’s Society. My Dad had suffered from Alzheimer’s for around 12 years and as a family we helped support him and made sure he could continue to live in his house.

As part of our fundraising efforts we organised a Black Tie Charity Ball, this was held at The Masonic Hall in Preston on the 9th December 2017 – as part of our efforts to get raffle prizes I contacted John Deere to ask if they would like to donate a Ride-on-Mower as a star prize, in exchange I offered to take a separate one from John O’Groats to Lands’ End (874) miles to try and set a New World Record for the fastest time taken on a Lawnmower - this was at a speed of 9 mph.

John Deere readily agreed and this task was completed on the 30th July 2017 taking 5 Days 8 Hours and 36 Mins and is an Official New World Record.

Our Ball was a fantastic night, live music, good food and a fantastic venue – Miss England Elizabeth Grant was there to do the prize draw and Lancashire Life covered the Event – so far (02/03/18) we have raised just short of £9000 which is fantastic given we only set out to raise £1000.

Sadly on the 1st January 2018 my Dad – James Maxfield passed away however this will spur us on to raise more money and have some fun along the way.

Please help us with your donations or just join us on one of our events.