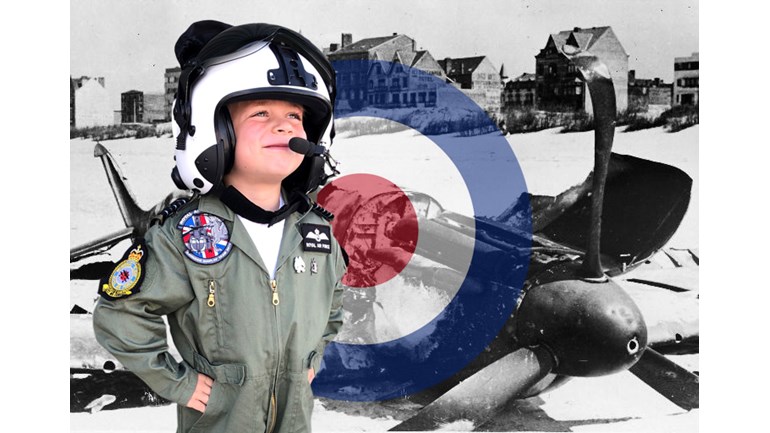 I am raising money for The Royal Air Force Benevolent Fund because they support RAF Veterans in need.

Thank you for taking the time to visit my JustGiving page. I am six years old and on the 28th May I will be walking the escape and evasion route of Pilot Officer Al Deere, 80 years to the day he was shot down and crashed in Belgium and escaped back to Britain from Dunkirk to fight in the Battle of Britain.  Read on...

On the 28th May 1940 Pilot Officer Al Deere of 54 Squadron at Hornchurch was flying in a Combat Air Patrol over Dunkirk with seven other Spitfires from his Squadron. Close to Dunkirk he engaged a German Dornier Do 17 bomber at 300 yards and whilst damaging the aircraft, the German bombers rear gunner hit Pilot Officer Al Deere's Spitfire engine causing him to crash land on the Belgian beach of Oost-Dunkerke. Sustaining a head injury Pilot Officer Al Deere was helped by a Belgian soldier to a chapel where his head wound was bandaged. He then made his way to Dunkirk via a 'borrowed' bicycle, by foot and in a British Army truck. Arriving in Dunkirk he made his way to the East Mole where most of the Royal Navy destroyers were evacuating British soldiers and landed at Dover later that evening making his way back to his Squadron some 17 hours after being shot down.

By the end of the Dunkirk evacuation Pilot Officer Al Deere had claimed 7 enemy aircraft destroyed and 2 shared destroyed. On the 27th June 1940 he was awarded the first of two Distinguished Flying Crosses at Buckingham Palace by the King for his role in the 1940 campaign. He was also awarded DSO, OBE, Croix de Guerre and the American DFC. Al Deere went on to serve in the RAF until 1967 retiring at the rank of Air Commodore after 30 years of distinguished service. Al Deere was a New Zealander that came to Britain in 1937 to join the RAF purely because he wanted to learn to fly. He died in 1995 aged 78 and his ashes were scattered along the River Thames from a Spitfire.

My challenge for 2020 is to follow the route of Al Deere's escape to Dunkirk, 80 years to the day on the 28th May 2020 wearing my RAF flying suit. The trek will start at the chapel where Al Deere's head was bandaged and from there I will visit the exact location where Al Deere's Spitfire crash landed and I will place a Poppy Cross in the sand after a moments reflection. I will then head down the coastline to Dunkirk and on the way visit the wreck of the Crested Eagle bombed by the Luftwaffe during Operation Dynamo to pay my respects to some 400 souls lost below her decks. From there I will pass the French and British memorials at Dunkirk and then on to the finish point at the end of the East Mole where Al Deere was evacuated. The approximate distance is around 25 kilometers and I will attempt it over two days being self sufficient, carrying all the supplies I will need, spending the night in the sand dunes just like the British Forces did 80 years ago. I will be doing this all with the assistance of my Daddy.

I hope this challenge inspires you to donate to my JustGiving page. Please help me beat my 2019 fundraising total of £6,500 so the RAF Benevolent Fund can continue looking after RAF Veterans and their families in need just as they looked after the skies we live under when we as a nation were in need. Thank you so much.