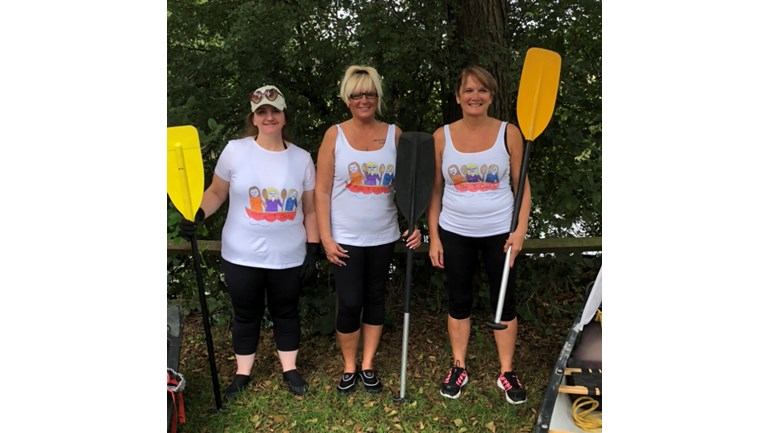 Thanks for taking the time to visit our just giving page and reading our story.

The weekend of the 12th August 2017 started like so many summer weekends before. Vikki had complained of an earache from the Thursday but didn't make much of it. On the Friday night Vikki and her husband Mark went out for a drink, which led to a few. True to her fun loving nature they had an amazing night, bouncing off of one another as they always did and Vikki had her fellow drinkers in stitches. Completely true to form for those that had the privilege of knowing Vikki personally.

On the Sunday Vikki and Zoe (Vikki's sister) went to the boat with Amelia (Vikki and Marks daughter) and Zoe’s daughter Elise. Before they went Vikki said that she had an awful earache and Zoe suggested postponing, but Vikki's zest for life prevailed and she said she'd be fine. They sat on the back of the boat, crying with laughter and had the most amazing night. In a usually quiet Marina they suddenly had new mooring buddies that owned a VW camper and talked of the adventures that were yet to come.

During the evening Vikki had complained of earache and a pain in her head, which she dismissed and said would be ok and would not spoil her night. Suffering from severe earaches as a child Zoe sympathised and thought no more of it. In the morning they had planned to take Elise and Amelia to teapot island for breakfast and then take the boat out. Vikki said she didn't feel well enough to take them for breakfast and wanted to stay on the boat. When they returned Vikki said she just wanted to lay down. Combined with an earache and a few drinks the night before we didn't think too much of it.

By the afternoon she was no better and called Mark to collect her. Mark arrived late afternoon and took her home. Amelia wanted to stay and Mark and Zoe agreed that it would probably be best if Vikki wasn't well. When Mark and Vikki left that Marina not for one second did any of us consider that it would be the last time Amelia, at 6, would see her mummy.

On the Wednesday morning Vikki woke Mark at 5am, asking him to call an ambulance. The paramedics arrived and the first were dismissive of how serious it was. Thankfully another saw some critical symptoms and rushed her to hospital. Mark could only watch as Vikki went from being completely coherent at home to delirious at the hospital.

Mark called Zoe early on Wednesday morning to say they were at the hospital and Vikki had suspected meningitis and were looking at transferring her very shortly, where they agreed to meet. After a few tearful phone calls and updates Zoe received the most awful telephone call she could possibly imagine and without a doubt the worst Mark would have to make. When Mark's voice failed him Zoe knew what he was going to say, she needed to be there immediately.

When Zoe and her parents arrived Mark and his mum were distraught. They all sat in complete shock and disbelief that this could be happening or even possible. They'd put Vikki in an induced coma and all they could do was sit and wait, hoping for a miracle. There was a glimmer of hope when Vikki was taken for surgery to the brain in the hopes that it would reduce the swelling. The wait was agonising but the surgeon seemed to have hope and they clung to that dearly. A blur of tests followed and by Friday they were due to receive an update... There was no response. Nothing they could do. They had to turn off the life support and say their goodbyes. The devastation felt in that room was deafening.

How could Amelia not have a mummy? Be deprived of a final kiss or cuddle. How on earth would Mark tell her mummy wasn't coming home... Heartbreaking doesn't come close.

Howver even in the darkest moment of our lives, Vikki's love of life and her caring and generous nature shone through. They asked the family if they were happy for Vikki's organs to be donated, and knowing her wishes it was a unanimous yes. Mark, Zoe’s parents and Zoe said that she'd made her wishes so clear there was no question. Vikki saved three lives the day hers was taken so suddenly, which brought some comfort and would make her feel very proud. She was an inspiration to so many and loved by all that knew her.

Now it's our turn to do her proud and save more lives.

Vikki and Zoe used to paddle down the River Medway each year while Vikki worked at Medway Bridge Marina for various charities. This year Mark and Zoe would like to complete the paddle along with our family and friends, us included, in memory of Vikki and to raise much needed awareness and money for meningitis. The aim is to fight back against Meningitis. If one person can be saved through raising awareness then we will all find some comfort 💜

Vikki was the most amazing person you could wish to meet and for those that had the privilege of being her family or her friend were very honoured, she will never be forgotten. She's mentioned every day and even in her absence can make everyone laugh hysterically with her stories - funny isn't always nice but funny is always funny ❤️

For each and every one of you that has taken the time to read our page we would like to say a heartfelt Thankyou. Please take the time to read the symptoms of meningitis. There is no time to waste, if you suspect meningitis seek medical advice immediately. We do not wish any one else to go through this and wished we'd known more.

https://www.meningitis.org/meningitis/check-symptoms  PLEASE PLEASE take the time to read this  - awareness is key to fighting back against Meningitis 💜


Donating through JustGiving is simple, fast and totally secure. Your details are safe with JustGiving - they'll never sell them on or send unwanted emails. Once you donate, they'll send your money directly to the charity. So it's the most efficient way to donate - saving time and cutting costs for the charity.