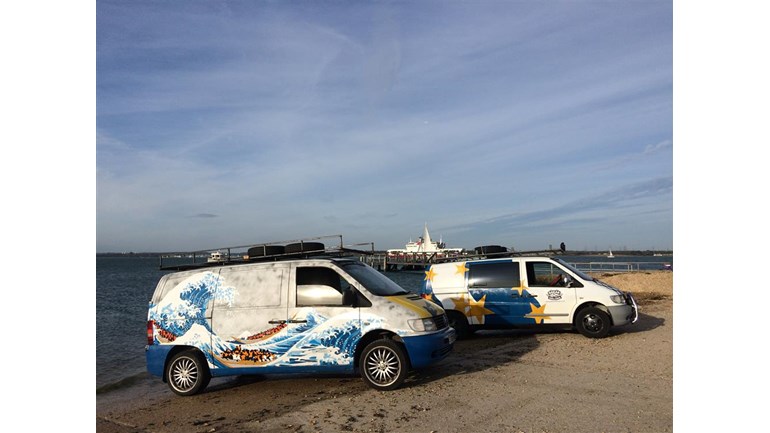 Driving through the Sahara Desert for Legs4Africa because they need a van, prostheses, and our support

We recycle redundant prosthetic legs to support amputees across Africa

We are setting off soon for a journey from the UK to The Gambia with the Banjul Challenge 2018, and - next to supporting Amnesty International and making a documentary about our trip - we are supporting Legs4Africa in The Gambia!

Legs4Africa began in The Gambia with the delivery of a single prosthetic leg in 2013. Since then the organisation has continued to increase the ways in which it supports existing services whilst developing new solutions to help amputees.

“A prosthetic leg has a tremendous ability to change a life. It gives an amputee a chance to stand up, walk again and get back into work.” – Tom Williams (Legs4Africa Founder)

The objectives of Legs4Africa are

(a) the advancement of health and/or the relief of human suffering.
(b) the relief of those in need, by reason of ill-health and/or disability and/or financial hardship by the provision of prosthetic limbs and other mobility equipment (which is collected in the United Kingdom and which would otherwise have to be disposed of under EU law) to individuals in need of prosthetic limbs in Africa who cannot afford, or otherwise do not have access to, such healthcare.

We are going to donate our van to Legs4Africa in The Gambia. We will be meeting Bob and the team in Banjul to hand over the vehicle, and also several suitcases full of prosthetic material which we received from the Bristol HQ of Legs4Africa to safely bring them to the place where they are so much needed.

Further to that we would like to enable them to run and maintain the vehicle for as long as possible. It will be needed to as a mobile unit to make regular home visits to amputees and acting as a form of transport for amputees to get to and from the hospital in Banjul.

So who are we, and how did we get to this point to become friends of Legs4Africa?

Two years ago, four intrepid friends Peter, Angela, Karsten and Daniel decided to join forces to take part in the Banjul challenge just for a "bit of fun"! What started as a light-hearted conversation has evolved into a full blown mad project involving two rusty old vans, a documentary film and a human rights campaign.

The Banjul challenge is the longest banger rally in the world. Teams leave the UK every December and head south through Morocco, Western Sahara, Mauritania and Senegal, arriving in Banjul in The Gambia. The journey is approximately 3700 mile and crosses the Sahara desert. On arrival all the rally vehicles are auctioned in aid of the Gambian National Olympic Committee (GNOC) and the association of Small scale Enterprises in Tourism (ASSET) who each receive 20% of the funds raised and the balance is distributed among local small businesses, NGOs, schools, etc.

Peter Shields has been talking about the Banjul challenge for about 10 years. As his mid life crisis developed, he finally decided to commit in order to avoid further procrastination. He is a teacher and lecturer who has travelled in Europe, The Middle east, Africa and South America, but never with the degree of uncertainty and lack of guaranteed arrival that the Banjul Challenge presents. Currently dabbling in film making, he hopes to make his first competent documentary ( on behalf of Amnesty International's campaigns in North West Africa) with his friend and co-driver Daniel. In the spirit of existentialism, it's at least a chance to do something with a greater degree of authenticity than life might typically present. After all, what could go wrong, and why would it matter?

Angela is from Germany but lives in the UK. "My beloved partner-in-life Peter had spoken of undertaking this specific challenge for years. It was never really the plan that I would be part of it but here we are, together with our wonderful friends Daniel and Karsten, we make a small but amazing team. The journey so far has already been quite exciting, and I feel the onward journey will leave us all a little changed. I want to challenge myself, to go out on adventures, to feel alive, and most importantly to do good. Because I can."

East German Karsten Hentschel, currently residing in Weimar, once the cultural capital of Europe and home of past pop stars like Goethe, Schiller, Liszt, Gropius, Strauss and Kani. He likes riding bicycles on mountain trails and has crashed several times. Unlike his cycling skills he has a flawless car driving career. Trained on an old russian military truck model URAL 375D while serving military duties in the east german NVA 30 years ago, he never had a car accident. He is looking forward to checking out the wheel on the wrong side of the car.

Daniel was born in Venezuela and is the fourth member of this motley crew. He met Peter while climbing mount Kilimanjaro in 2003. He has been listening to Peter talk about the Banjul challenge for almost as long as he has been talking about it. Daniel has zero knowledge of car mechanics but he is a very good backseat driver and he really does have a degree in cinematography. He also makes a mean chai and likes to contemplate the passage of time.

You can support The Banjul or Bust film project by donating to our crowdfunding page.

You can also visit our information page at yogapod for updates and news flashes. And you can check our progress so far by visiting our video diary Banjul Challenge 2018. You'll find here a collection of entertaining short films documenting our challenge so far.

The World Health Organisation states that just 1 in 10 people with physical disabilities in the developing world have access to assistive technology. Legs4Africa addresses part of this deficit by providing equipment to societies where such equipment is either unavailable, or prohibitively expensive.

Charity Registration No. 1158697
Find out more about charity fundraising