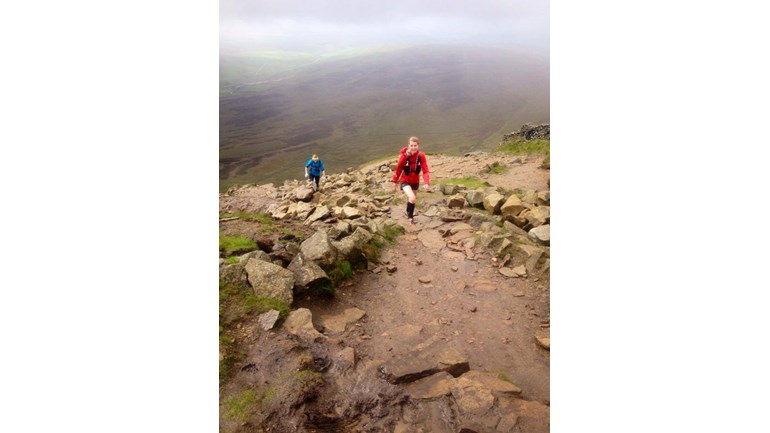 I shall be running 10 events this year for Myaware - Fighting Myasthenia Together because I would like to raise awareness for those with MG.

We increase public and medical awareness to support people with myasthenia

10 years ago this May, at the age of 13, I was diagnosed with Myasthenia Gravis; a rare autoimmune disease in which the immune system attacks the body’s own neuromuscular junctions, resulting in fluctuating muscle weakness. Symptoms can be managed, but there is no cure. After being hospitalised again last September, I decided to raise both awareness, and (hopefully) some money for Myaware (previously the Myasthenia Gravis Association MGA) by completing 10 races this year, including the Yorkshire 3 Peaks and a trail marathon.

Symptoms of MG can be debilitating and vary dramatically between individuals, even on a daily basis. My onset was sudden, and minor symptoms that were dismissed deteriorated within 2 weeks, resulting in ventilation in ICU as my respiratory muscles had become too weak.  I couldn’t breathe independently, eat or speak, and had virtually no facial expression due to limited control over my facial muscles. After my diagnosis I had plasmapheresis and started steroid treatment and had to medicate every 4 hours. The following year I underwent a full transsternum thymectomy and spent a few days in a wheelchair, but gradually things started to improve. It took a further 3 years to come off the steroids and I went into full remission.

For 4 years I had minimal symptoms, went to university, took up running and started racing. Although at the back of my mind, I didn’t give my MG much thought, as my symptoms were controlled and I felt that there were no restrictions. It hit me hard when I relapsed again last year, as medication had little effect and I became increasingly weak.

People ask what it feels like having MG, and it’s difficult to put into words.  At my worst I struggle to drink a cup of tea, eating is nearly impossible, and every word is difficult to articulate. Sometimes I have to weigh up whether it’s worth the effort of speaking as it takes too much out of my muscles, and I spend a lot of time clock watching, waiting for my next dose of medication.  Basic communication such as speaking and smiling become impaired, which can be isolating. It’s immensely frustrating as I have to sit back and watch life go by, and I’m not one for ‘taking it easy’!

On the other hand, I’m very lucky as my symptoms can be controlled, which is not the case for everyone with MG. As clichéd as it sounds, running makes me feel alive and I really appreciate being healthy enough to do so.

Experiences with MG can be very conflicting, and treatment does seem to be a case of trial and error, which is why more research is needed to establish the efficacy of both existing and new treatments. For example, regarding my surgery I was told that there may be improvements, no effect, or worsening of symptoms. Essentially it was a gamble! Myaware helps to fund research, and as MG is relatively rare doesn’t receive the same recognition as other more well known charities. Anything raised will be greatly appreciated.

Thank you for reading and for more information on MG please visit http://www.myaware.org/