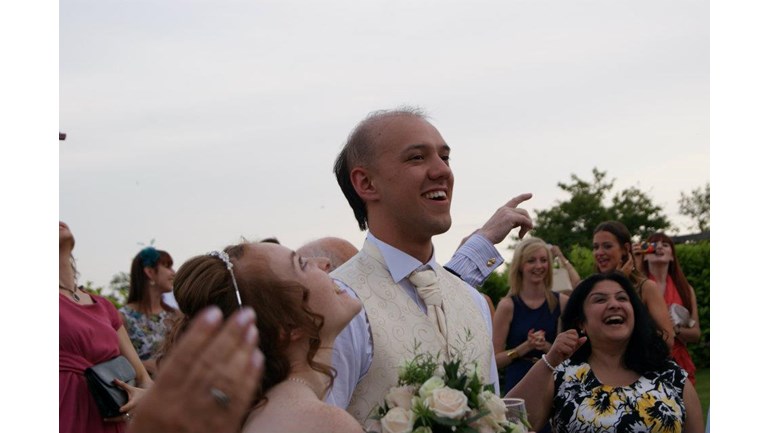 Up/down in 7days!Raising £££'s to make it worth it for Brain Tumour Charity (The) because research & support is vital to fight this disease.

George was my best mate. Our story began at school, when at the age of 12, he joined myself and seven other boys at the start of a journey that took place in the middle of a park just outside London with nothing but ballet and deer. Our aim, although at the time I'm sure we didn't know it, was to become professional ballet dancers. For anyone that has been through the experience, you understand how unique, tough and slightly bizarre the whole thing was. On graduating, aged 16, we had formed strong bonds; making life-long friendships and even meeting future spouses (I'll get to that bit later).

After graduating, George continued his training at the Royal Ballet Upper School (he was always more talented than me), where as I headed back to the Midlands, which was both our 'hometown', to continue my training there. This worked out nicely for me as George's parents, Kevin and Barbara, lived up the road from our boarding house. Through all the car journeys to and from school and the holiday's they kindly took me on, they became my 2nd parents and I had them living just a 5 minute walk away. It also meant I got to see my mate on the weekends he'd visit.

George and I also basically shared a birthday. He was a day older than me, and some might say a day wiser...Just before our eighteenth birthday, George was diagnosed with a brain tumour. At the time, as young fit ballet dancers, ready to put into practice the years of training and embark on a professional career, this was hard to believe.

With the diagnosis, came the treatment. It wasn't until I saw George with staples in his head that I truly realised how serious his illness was, and even with my youthful optimism I began to understand that he might not be ok. However, this did not seem to deter George. This brings me to Kelly. George and Kelly started dating a year after George joined the school, they were childhood sweethearts. Throughout his treatment, Kelly along with his parents were his rock. I never identified George with cancer. Even with all the operations and treatment that come with battling cancer, he always had something else important that was shaping his life. Firstly, he decided to go get himself a degree in Sports Science from the University of Birmingham. Next, he informs me that he is going to marry Kelly and that I best start preparing a stag do! They organise a wedding, buy a house together, finish their studies, he gets a job at a five star hotel, does massive amounts of fundraising for a charity that supported him, spends far to much time on the playstation...the list goes on, all this whilst fighting brain cancer. The funny thing was, we barely ever spoke about his cancer.

This was George, a down to earth, dry humoured warrior. A true gentleman that inspired us all. If George had been part of your life, you were a lucky guy. He is the best guy I've known and I'm sure many would agree with me.

George heroically battled with his cancer for 8 years until he passed away on 14th June, a month and a day after his 26th birthday. He did well.  Less than 20% of people diagnosed with Brain Tumours live for more than 5 years. Brain Tumours kill more children and adults under the age of 40 than any other cancer. Despite these facts, only 1.37% of the UK's national spend on research into cancer is on Brain Tumours. So much more money and awareness is needed to at least begin to catch up with developments that have and are happening in other diseases.

On a cold February day earlier this year myself, my girlfriend Fenella and Kelly were sat eating lunch in a cafe just outside Cambridge when we came up with the idea of climbing Kilimanjaro, Africa's highest mountain, to raise lots of money for the Brain Tumour Charity. Fenella quickly said she would help with the fund raising but opted out of the trek...she was smart. In my ignorance, I thought it would be a few days of hard walking. After looking into it, a third of people who attempt it don't make the summit. Even if you do the 6 months hard training, there is no guarantee of making it as you might be hit with altitude sickness. However, this hasn't put us off and on 24th February 2018 we will fly out the Tanzania, Africa and will climb the 5885metres for George. We know that the money raised would make him super happy. So please support us by donating. This money will make a difference for all those affected by Brain Tumours.