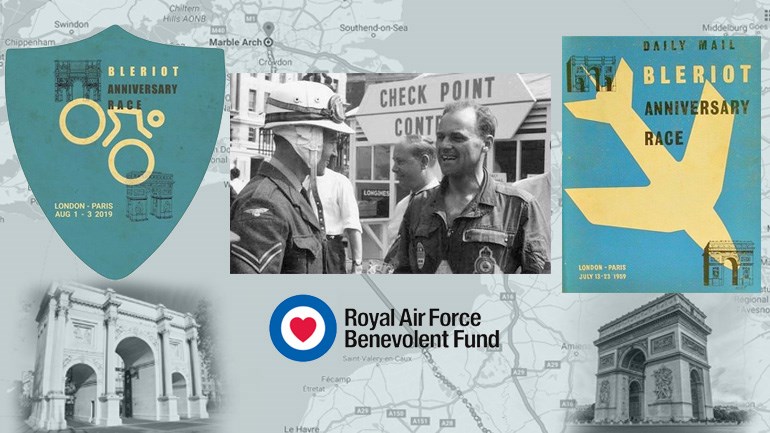 In August 2019 a group of amateur cyclists will be embarking on a journey to commemorate the achievements of the winner of the 1959 Blériot Anniversary Race, Squadron Leader Charles Maughan.

The race was organised by the Daily Mail to mark the 50th Anniversary of the first crossing of the English Channel, achieved by Louis Blériot. Over a two week period, teams raced between Marble Arch in London and the Arc de Triomphe in Paris, using any mode of transport possible.

At the end of the competition, Charles Maughan was the fastest man to travel between the two points, in a time of 40minutes 44 seconds, aided by his RAF team No 65 Squadron.

To honour the 60th anniversary of the incredible feat achieved in 1959 and in memory of Charles Maughan, the group of cyclists (led by grandsons Daniel and Simon Maughan) will set out from Marble Arch on the afternoon Thursday 1st August 2019 and arrive on the morning of Saturday 3rd August 2019 at the Arc de Triomphe. The target time for this ride, in celebration of the 1959 effort, is 40hours 44 minutes.  .

The ride will not only be in commemoration of the 1959 attempt but will also collect for a very special charity, the RAF Benevolent Fund. The RAFBF is the Royal Air Force's leading welfare charity, providing financial, practical and emotional support to serving and former members of the RAF – regardless of rank – as well as their partners and dependents.

They help members of the RAF family deal with a wide range of issues: from childcare and relationship difficulties to injury and disability, and from financial hardship and debt to illness and bereavement. Any member of the RAF family can approach the fund for help.

This will be a self-funded ride and all proceeds collected
will be sent to the RAF Benevolent Fund. We would appreciate any offer of support, whether a donation to our charitable fund at the following page or the offer of supplies to aid our ride or even just support to send us on our way.