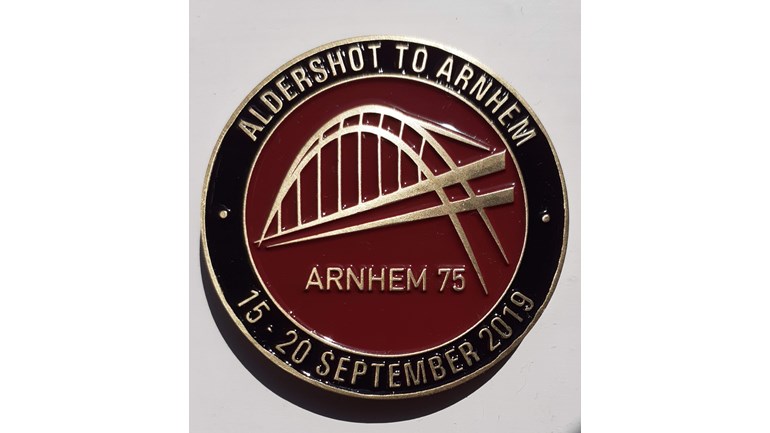 We are a group of retired REME soldiers who have all served with Airborne Forces at various time since 1975. In 1984 a number of us visited Arnhem for the 40 anniversary of 'Market Garden' and decided that in the future we should do something to raise awareness of this epic battle amongst other REME soldiers serving in Airborne Forces and to raise some cash along the way. A plan was hatched and Exercise 'Arnhem Bimble' was created. The basic plan was for a dozen or so serving Airborne REME soldiers to tab from Aldershot to Arnhem via Harwich and the Hook of Holland. The first of these 'Bimbles' took place in 1986 and then every other year for about 20 years.
Last year in Arnhem we decided to resurrect the event but with a slight difference; the team would be made up of retired Airborne REME troops who had at some stage completed the event whilst still serving (one of those tabbing this year was also on the first one in 1986).
The current team consists of 19 men the oldest being 64 and the youngest 40ish. Our planned route is to depart from Aldershot and tab, with 35 lbs bergens, to Arnhem via London, Chelmsford, Colchester, Harwich, Utrecht and Ede. The event will be a relay with two men tabbing at any one time over short legs of approx 3 miles.  Our final leg will be from Ede to the John Frost Bridge via Heelsum and following Route Lion to arrive at the John Frost Bridge at approx 1500hrs on Fri 20 Sep 19.

SUPPORT OUR PARAS is a charity which supports The Parachute Regiment through the welfare of serving soldiers and families and those affected by recent operations, and through the maintenance of its regimental efficiency, ethos, spirit and heritage.

Charity Registration No. 1131977
Find out more about charity fundraising