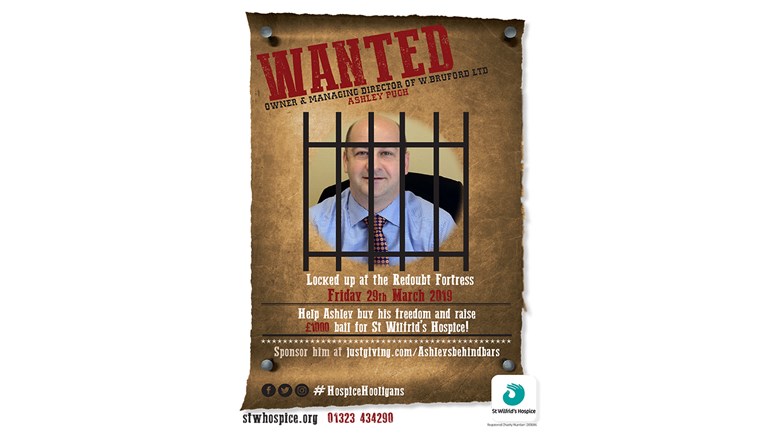 Here's what they're saying about me ...

'The next rogue to be spending time in a casemate at the Redoubt Fortress for St Wilfrid’s Hospice is Ashley Pugh, Managing Director W. Bruford the Jewellers, which has been established in Eastbourne for more than 130 years.

On taking part in Jail and Bail, Ashley said: ‘As a place that has, for many of us, looked after a relative or close friend, St Wilfrid’s needs every penny we raise to continue its fantastic work.

‘Be as generous as possible and I will promise to stop wearing the dodgy jackets… well, maybe!’

Although Ashley dedicates much of his time to high-end jewellery and watches, the fact is not always reflected in his sartorial choices, as in September of last year he was convicted on two counts of crimes against fashion.

Prior to the conviction, Pugh was sighted at several exclusive networking events - not in the black tie that is customary of such gatherings - but in a series of increasingly tasteless jackets, shell suits and windbreakers, some of which were reported to be 100% polyester.

Attendees of an event in September, at which Pugh was present, said that the definitive low point - on an evening of highs - was the defendant's appearance in a camel coat.

We can only assume the act was a misguided tribute to - or channelling of - Only Fools and Horse’s Del Boy. Although Pugh’s intentions are still unclear, the move looks unlikely to be good for his business – which, we hasten to add, supplies only genuine products.

Although many trends of the past have had a successful seconds innings, including neon, acid wash and, perhaps inexplicably, velour tracksuits, it’s safe to say that some fads are best laid to rest.

Fortunately for Ashley, the inmate jumpsuits in which all prisoners will be kitted out for Jail and Bail look to provide some much-needed respite from his dodgy fashion choices of late.'

St Wilfrid's Hospice is a local charity providing skilled and compassionate care and treatment for all patients and their families with complex needs as they near the end of life. St Wilfrid’s Hospice serves a population of around 230,000 living in Eastbourne, Polegate, Pevensey, Seaford, Hailsham, Heathfield, Uckfield and everywhere in between. For more information, visit www.stwhospice.org

Charity Registration No. 283686
Find out more about charity fundraising