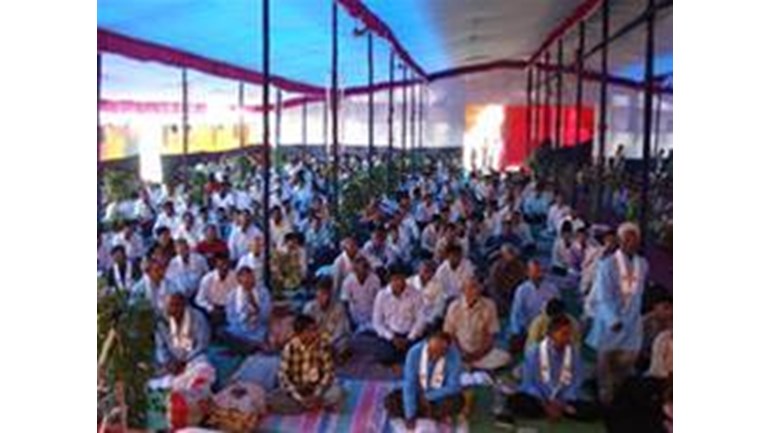 An Appeal for funds for a Meditation Retreat in India for 1,200 people

This retreat is now over and was highly successful. The participants were full of praise for it and many people wept as they were leaving - they had no idea the Dhamma could have such a wonderful effect. They were of course mainly those who had had little or no contact with the Dhamma - which is exactly the sort of people we were hoping to attract. As for those who were regulars and also the organisers - they felt deeply inspired and are now confident that a single Centre can organise this sort of thing - that an India-wide team was not in fact required for such an undertaking.

Do also look at http://picasaweb.google.co.uk/Ashvajit.Picasa/ if you would like to see even more photos of the retreat. It was held in Amaravati, Central India, from 24 October to 30 October. It was led by a team of 25 Order Members from the Amaravati area including Chairwoman Dhammacharini Jayamani, Chief Organiser Dhammachari Nagabhadra, and also myself - Dhammachari Ashvajit.

Leading up to the retreat we gave a series of 20 public talks in towns large and small in the Amaravati region and have reached an estimated 15,000 people directly and many thousands more indirectly.

Though a good proportion of the target has already been raised, there is still a way to go, so do consider giving, even if you have already done so. About £8,000 altogether is needed to pay for the publicity campaign and for the provision of facilities for the retreat itself - food, water, toilets, shelter etc. I would not want the organisers of this wonderful retreat to be left in debt!!!

Donating through JUSTGIVING is quick, easy and totally secure. It is also the most efficient way to sponsor the spread of the Buddha-Dhamma: FWBO (Dhammaloka) gets your money directly and, if you are a UK taxpayer, your gift is increased by the addition of 25% in Gift Aid, plus a 3% supplement.

Thanks for visiting this fundraising page and reading so far. Please give to the fullest extent you are able at present. Your gift, large or small, will be put to the best possible use - supporting the Dhammakranti in India.

Yours in the Dhamma,