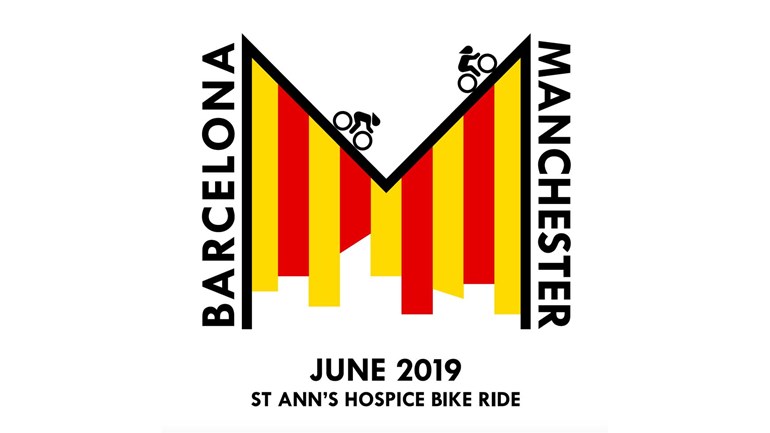 Cycling 2,000kms from Barcelona to Manchester for St Ann's Hospice because the hospice needs a new ambulance.

10.20am, May 1st 2018. A train journey from Barcelona to Madrid to cover Atletico v Arsenal. The train passed Villafranca de Penedes when the phone went. It cut into a song called Mystify by INXS on Spotify.
“Some silken moment. Goes on forever. And we're leaving broken hearts behind.”
It was dad and it was not positive. Cancer. A secondary cancer. He’d had the first for 13 years and lived a normal life, thanks, in part to the NHS he’d paid into all his life and a drug invented in the United States in 1998. But a second one was serious.
“I’m telling you son, you’re my oldest child.”
Tears. For the first team in years, and not of joy like the last time.
I knew the news was serious so did my family and I spoke to my sister for hours. We’d all try and be positive.
There was treatment for dad and brave faces, M&S chocolate eclairs in The Christie hospital, unconditional love and support for him every day at home.
The news got worse and worse and worse. The drugs had worked for 13 years, but not now. Not really. Now the drugs don't work. They just make you worse. But I know I'll see your face again.
Dad had six months in acute and often unbearable pain. A man who never stopped complaining about Manchester United seldom complained about his own pain. It was awful to see a fit man diminish and you feel helpless. What can you do to help? We wanted to do something.
“Dad, we're going to raise money by cycling from Barcelona to Manchester next year.”
“That’s a bit much, son. How far is it?”
“2,000 kilometres.”
I told him again a few week later.
“It’s a good idea son, but can't you avoid the mountains?”
“No dad, I can't move the Pyrenees.”
“I’d go where there’s the most minge if I were you.”
Charles Samuel Mitten died on November 6th 2018 in St Ann’s Hospice, Salford. He was 69.
I’d told some mates about the ride. A few were on it from the start. Lads – JP and Steve Price - who have cycled extensively. At dad’s funeral, with people five pints in and the DJ getting the place rocking (seriously!), the cycling peloton would be 200 strong. It’d shrink to three, then grow to five. My brothers Jonathan and Sam too. Five cyclists.
Then came an offer to drive from Murph. That’s 18 days unpaid. And another offer, from dad’s brother David. He’d regularly driven him to The Christie. He offered massages, cooking, cleaning and support.
Dad’s wife Jayne and my sister Hayley had been struck by the welcome they’d had at St Ann’s Hospice in the final hours of dad’s life. Could we help them?
I got in touch. St Ann's needed an ambulance. It’s £40,000 for a new one, a lot of money to raise but we can start towards it. It would be used for their hospices around Manchester. It’ll help out-patients, too. A few weeks before dad died, there wasn’t even an ambulance available to take him from a hospital back home. After waiting for seven hours, his brother Sam took him instead.
We’ve been planning this for eight months. We’re all training. 120kms day after day after day won’t be easy as we go via Girona, Perpignan, Carcassone, Toulouse, Bordeaux, Cognac, Angers, Cherbourg, Portsmouth, Oxford, Birmingham and Manchester. We’ve got sponsors too – and we'll give them plenty of publicity - who’ll effectively pay all our costs (the support van, fuel for it and for the body) so that every single penny raised can go towards that ambulance. Red Army Bet will pay us £5,000 (www.redarmybet.com). Meadows Gin £2,500 (www.meadowsgin.com). Brittany Ferries will give us free crossings across the Channel (www.brittany-ferries.co.uk). Fat Heads, a quality Manchester creative company @fatheadsuk did the above logo for us for free.

A couple of the other lads will walk the length of Hadrian's Wall and there will be a football tournament that dad's youngest son, Harry, will play in.

As for the ride; we'll tell the story of our journey along the way, with photos, videos and maybe a few podcasts if you’re interested. We can mention people who sponsor us, we might even be up for dares and making fools of ourselves if it means raising more money. But if you’ve got a spare pound to donate, you know exactly where it's going.

St Ann’s Hospice provides care and support to people with life-limiting illnesses, their families and carers in Greater Manchester. Through the generosity of our supporters, all our care is provided free of charge and makes a real difference to those who we support.

Charity Registration No. 258085
Find out more about charity fundraising