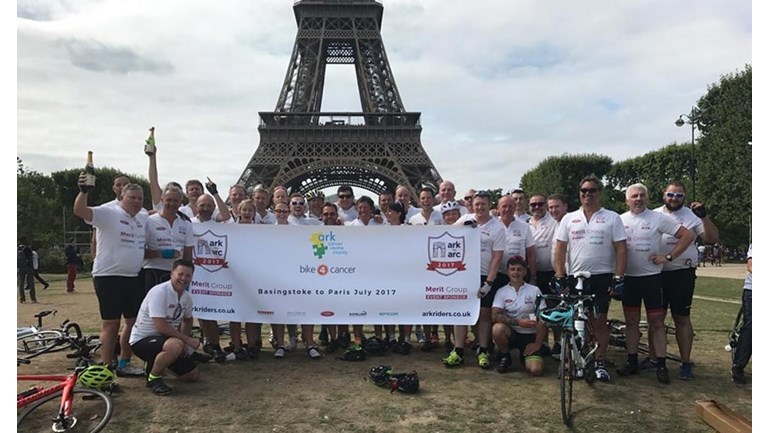 The Beaufort members of the ArkRiders will be taking on the Twin Towns Challenge 2019 to raise money for the Ark Cancer Centre Charity who are aiming to raise £5m to build a state of the art cancer centre in Basingstoke. They'll be riding from Basingstoke to Cologne via the Basingstoke twin towns Braine-l'Alleud (Belgium) and Euskirchen (Germany).

Andy Coles: As a young man you live your life as if you are immortal,
even when death touches you it is generally only associated with the
generations above you and hard to really relate to, as you get older you start to lose that feeling and illness and death slowing come into your personal consciousness.

However last year cancer came up and smacked me in the face. A
mate of mine was struck down with the awful disease in his early 30’s. A bright bubbly loveable rogue, who I had played football with not 12 months before was reduced to a shell of a man, terminally ill, unable to walk when he turned up to watch a game in his honour, while cancer had taken his body it was heart warming to see that it ever took his sense of humour! Sadly a few weeks after, Nolesy lost his fight, leaving a wife and two young kids without a dad, truly heart breaking stuff and a real shock personally for me as it hitso close to home. One of the biggest eye openers for me was the strain put on his family and just how hard it is for them. So investing in facilities for not just the patient, but also the wider family are really critical and easy to overlook, so the blue print of what the Ark centre will provides will be a massive benefit for so many people in and around Basingstoke.

Even with the story above, riding 450 miles in 5 days is a massive task and a huge commitment to training and time away from family. So this one felt like a ride to far for me, but having spent time over the winter
listening to the passion and energy of, Mark Jones and Merv Rees from the Ark Cancer charity and the amazing efforts from the committee at the Ark Riders it was impossible to say no, so more blood sweat and tears ahead of us for this fabulous cause; on to Cologne!

Many members of the team here at Beaufort have had their families affected by cancer, and so want to do their bit to support others that that will be affected in the future - We have been supporting the Ark Cancer Centre Charity for four years now, and this is just the latest

We really appreciate all of your donations, and keep an eye out for our training cycles in the run up to the challenge.

Charity Registration No. 1149758
Find out more about charity fundraising