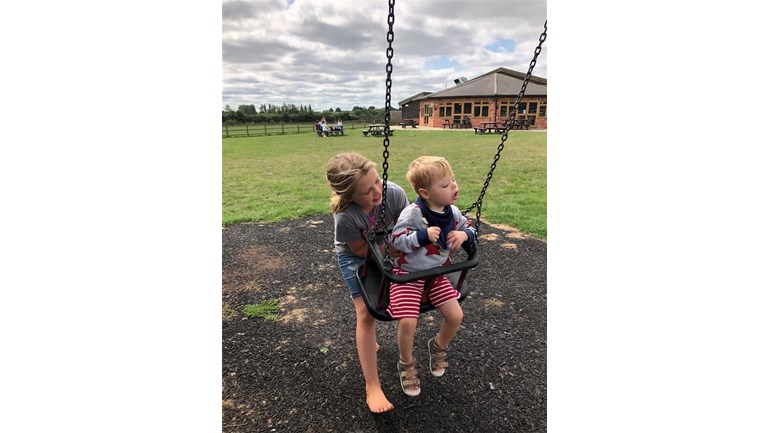 Running four half marathons in four months! for Tree of Hope because they support Eddie Braun

In June, Eddie Braun turns four and I have pledged to run four half marathons between now and then to raise funds to support Eddie and his family.

As many of you know Eddie is the son of one of my closest friends, Ilmarie, and the brother of my godson, Thomas. Eddie has a significant brain injury, caused by a suspected stroke in utero. He suffered a brain haemorrhage, resulting in a large porencephalic cyst on the left side of his brain. Consequently Eddie has various neurological conditions; he is registered as 'severely sight impaired' (the condition is called Cortical Vision Impairment), and has right Hemiplegia, as well as Infantile Spasms and Global Developmental Delay. Infantile spasms, also known as West Syndrome, is a severe epilepsy syndrome and it has had a truly devastating impact on his development.

Ilmarie and her husband Alex have worked tirelessly over the last four years to try everything available to them to give Eddie the best possible chance of developing. Not only are they fighting for the best treatments and equipment for Eddie but they have become spokespeople for the fight to allow children like Eddie the access to medical cannabis, a drug that is proven to have a significant effect on epilepsy.

The costs involved in helping Eddie's development and giving him the best quality of life are extremely high. Eddie needs various pieces of specialist equipment which the NHS recommends but cannot provide, as well as additional therapies like hydrotherapy. Because of Eddie's needs Ilmarie has not been able to return to work, and the financial burden on the family is extremely hard.

It is impossible to know how to support people you love when you know that everyday throws a different challenge at them. I decided that pledging to undertake a fundraising challenge would be the most beneficial thing for them right now.

Training for a big run is not easy for me with three small children at home and a husband that is only here for half the year but I wanted to make sure that I was doing my bit! I have run a half marathon before but never sustained my training over a long period of time so by undertaking to run FOUR half marathons, I will have to keep may training going for months! Surely, the thought of me having to drag myself out in the snow, wind and rain to complete my training is worth a few quid?

I am running in the following races:

Sunday 17th March - Bath Half Marathon (I am unbelievably grateful that a group of friends have agreed to run this race with me and raise funds for Eddie, including Eddie's mum, Ilmarie.)

Sunday 19th May - Chester Half Marathon

Be More for Eddie