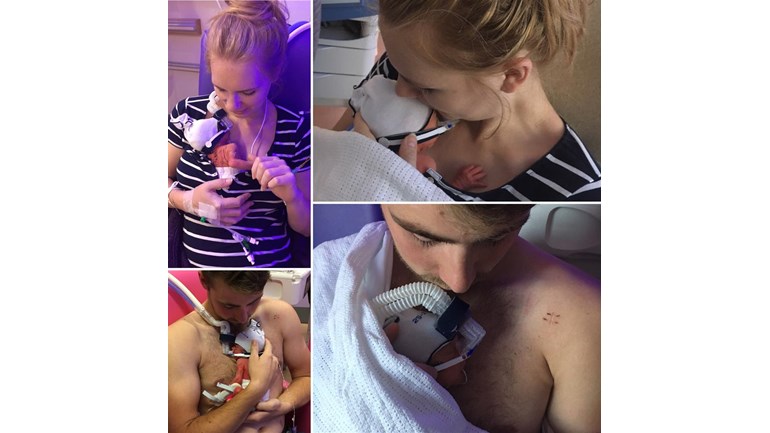 We are cycling the Prucential London 100 mile. for Twins Trust because https://www.tamba.org.uk/ttts

I am lucky to have two beautiful identical daughters, Isla and Jemima and my amazing wife Tabby.

We were so excited to find we were having twins, Tabby still says it's the best day of her life seeing the two of them on that first scan at 10 weeks. We walked away excited about having two babies and the fun joy they would bring us.

Week 12 we had a further scan and were introduced to our consultant at Warwick hospital. We were told about the risks of multiples, especially as our girls were identical, sharing the same placenta.

Week 17.5 at a check up scan they found that we had TTTS (https://www.tamba.org.uk/ttts). We were told that we needed to be seen urgently at the Birmingham Women's Hospital but know one could explain what was happening and why.

Tabby was admitted that Friday night for acute hyperemesis and to be under the care until I drove her to the Women's.

We were introduced to Proffesor Kilby that evening who explained everything and what the plan and risk were. We were told there was a 40% chance of loosing them both and a 80% chance that only one would survive. I didn't sleep at all that night, lying on the sofa in a delivery suite room.

Proffesor Kilby operated first thing through tabbys stomach wall and in to the membrain of the now called Jemima. He abblated the blood vessels causing the problem and reduced the amount of amniotic fluid.

Now we had to wait. 30 minutes. Two heart beats. I'm crying writing this, it was such an emotional scan. We went home and waited for 72 hours for our next scan, this was crucial, if the girls were alive then our chances increases dramatically.

Miss Imtiaz at Worcester Royal was now our consultant, a twin specialist and friend of Proff Kilby. We met on a weekly bases.

TTTS can come back at any point so this was an essential scan, every week we were so anxious so sit and hold hands so tightly the second we saw both heart beats. We charted there growth and started planning for a C section, 18th December.

We planned a visit of the hospital on the 11/9/2018 but didn't realise that the girls would be showing us the way. The night before at 19:30 Tabby started to get cramps and pains in a regular fashion. We were 29 weeks 2 days gestation.

Tabby drove us to hospital ( I had just had shoulder surgery) and made it before the pain became too intense.

By 2200 we were told that the girls were on the way and there was nothing we could do. A magnesium infusion was started as well as more steroids to reduce respiratory problems.

0935 the surgeon made the incision to find Isla covered in blood, Tabbys placenta had been abrupting since 1930 last night and knowone knew. Jemima was born at 0936.

They were both resuscitated.

They were both born septic.

There hand would only grip the very end of my little finger.

We had 1 week in NICU intensive care, 4 weeks in NICU and a week together in transitional care. The staff were incredible, we could support as much as possible and they would support us in everything. We spent 7 hours with the girls everyday.

The girls grew so well and started to feed on there own we managed to get them on to full bottle feeds before they came home on the 18th December to join Sherlock (the pup) under the Christmas tree.

We are the lucky ones, we have friends that have been through the same journey and lost both there babies. We have friends who had TTTS to a different level and managed in hospital over a long time. We were one of 56 operations performed at the Women's that year and with the 40% chance of loosing both can see that we need to know more.

I am cycling the Prudential London to Surrey 100 mile to raise money for TAMBAs TTTS appeal. I will be cycling with a good friend who also has identical girls, born at 34 weeks, 3 weeks after our two and had a similar journey getting their amazing girls home.

Please give anything you can to help understand TTTS and reduce the heartache that so many go through with the journey of TTTS.

Charity Registration No. 1076478
Find out more about charity fundraising