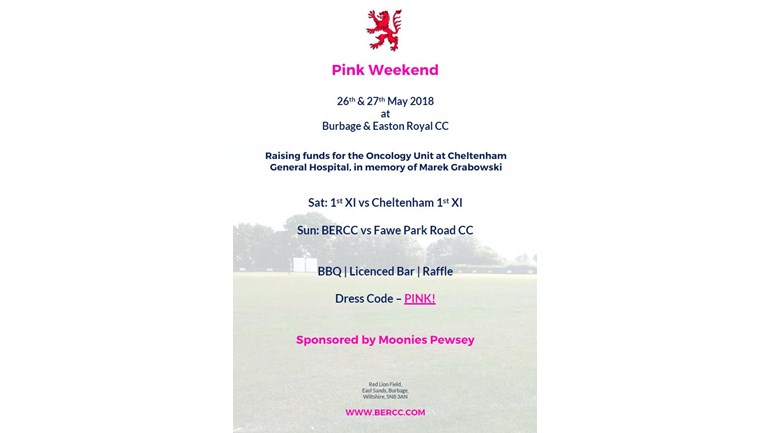 As many of you may be aware, we sadly lost our Chairman Marek Grabowski in October last year after his brave battle with cancer.

During Marek’s time as Chairman, we went from a small village club offering only a couple of senior sides and a limited junior section to one of the biggest clubs in the county, boasting 100 junior members, four senior league sides and a first XI competing in the West of England Premier League against some of the biggest towns and cities in the West Country. One of Marek’s greatest achievements at the club was to secure a second playing field The Glebe allowing double the amount of people to play cricket on a Saturday afternoon in our village. This was a stellar achievement and one which we will be eternally grateful of his efforts.

We have been looking for a fitting tribute to Marek and whilst watching the Ashes series in the winter, we were inspired by the Pink Test in aid of the McGrath foundation. The idea is simple – the players all wear pink caps, the stumps are pink and everyone in attendance wears as much pink as possible. On Saturday 26th May we will be hosting Cheltenham CC 1st XI in our very own pink game to raise funds for the Focus Trust Fund, which raises much needed funds for the Cheltenham Oncology Unit, where Marek received fantastic care and support.

On the following day, Sunday 27th May, we will also play Marek’s friends from Putney (Fawe Park Road CC) in a friendly out on the Glebe field. Throughout the weekend there will be a BBQ, a licenced bar, a raffle, some good cricket and hopefully some fantastic weather on show. We hope to see many of the local community support us and have some fun across the weekend.

If you are unable to attend the day, we hope you maybe able to make a small donation via this page to a fantastic cause.

Your support for our Charity enables us to invest in projects that make the hospitals better for you. Our aim is to create a comfortable positive environment for all of our patients investing in improved buildings, state of the art equipment and extra care over and above that provided by the NHS.

Charity Registration No. 1051606
Find out more about charity fundraising