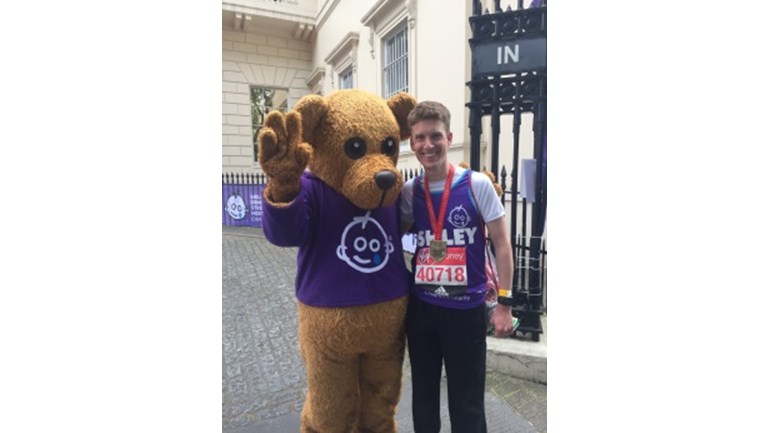 Since my first London Marathon in April 2015, I have been privileged to raise £56,507.87 by running for GOSH each year. This is thanks to the incredible generosity of so many friends and supporters. It’s right to say that I was considering drawing a line after three successive marathons, but when I found out that Bernard the Bear, the official mascot of Great Ormond Street Hospital, hadn’t yet run the London Marathon, Ithought I should help him put that right. So, in 2018, Bernard the Bear will run the London Marathon for the very first time, and he needs your help to raise a HUGE total for the life-saving work that goes on at GOSH.

In June 2014, my daughter Emily was diagnosed with a rare brain tumour known as a craniopharygioma.She underwent two long and difficult operations at Great Ormond Street Hospital, followed by a six-week course of Proton beam therapy in Jacksonville, Florida. Since then, she has had further surgery at GOSH to improve blood flow in her brain after suffering from two strokes in March 2016. Thanks to the world-class treatment and outstanding care she has received at Great Ormond Street, she has made remarkable progress, overcoming each of these difficult hurdles with strength and determination. Emily is now seven years old and in Year 2 at school, where she enjoys doing all the things that children her age should – learning to read and write, drawing and painting, playing sport, singing and dancing. She has ongoing needs with limited vision and complex
hormone replacement medication, but with the continuing support of GOSH and many other associated health professionals, her teachers, her friends and
family, she is living a normal life full of happiness and opportunity. As her
parents, it doesn’t bear thinking about where we would be now without the
treatment and support that Emily has had at GOSH, and we owe them a great debt of gratitude.

Great Ormond Street Hospital Children's Charity does such important work raising money which has helped our family and countless others. We had never imagined that it would be our child who would need the treatment and care offered by GOSH, but there are families just like us who, each day, are embarking on a similarly overwhelming journey through a child’s illness.

Please do consider supporting Bernard the Bear as generously as possible as he runs around London on 22nd April, so that GOSH can continue to help children like Emily and support families just like ours. Thank you.