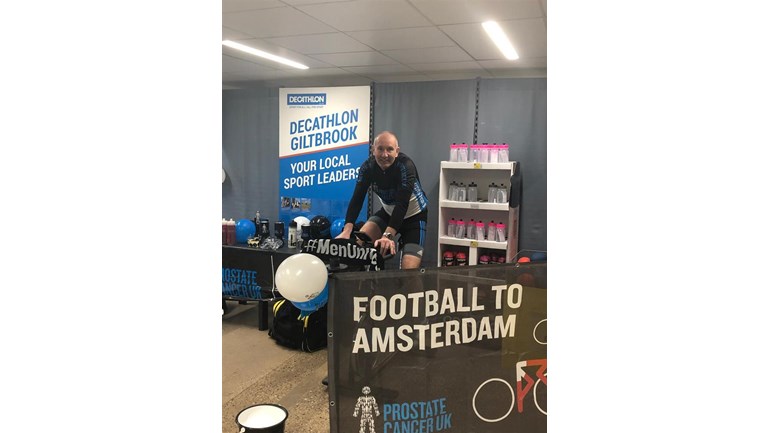 Last year I signed up for Football to Amsterdam 2018, to help raise money for Prostate Cancer UK, following my best friend being diagnosed with the illness.

Thanks to the wonders of surgery, supported by private donations, my friend has now recovered, but following his progress and meeting so many other individuals who have been touched by this killer has inspired me to sign up for the 2019 event.

Even during the fund raising for this years event it still amazes me how many men make who make donations have been diagnosed with Prostate Cancer, and have either completed treatment or in the process of receiving treatment.

During the 2018 event I met some very inspirational individuals who all had their own reasons for taking part, and this year I am joining 'Team Dear North' who last year raised over  £25,000.

As a keen cyclist, football fan, former Police Officer and someone who has been touched by this disease I have a number of factors motivating me to do this ride and would be grateful for any donations you are able to make which will go towards detection, treatment and research into Prostate Cancer in the UK

Here's a bit of background about the ride:

The official ride starts from Oakwell, the home of Barnsley FC on Friday 7th June 2019 and we cycle North East to Hull. An overnight Ferry Crossing from Hull sees us arrive in Rotterdam on the morning of Saturday 8th June and we then cycle from Rotterdam to the Amsterdam Arena, the home of Ajax FC.

Team Dear North, comprises of a mix of Football fans, generally Derby & Forest and a number of us including myself, have decided we want to cycle from the Derbyshire and Nottinghamshire areas straight through to Amsterdam. We will therefore be setting off the day before the official ride and cycling from respective starting points in our home counties before joining up to complete the journey to Barnsley.

In total over the 3 days we should cover some 210 miles in aid of this cause.