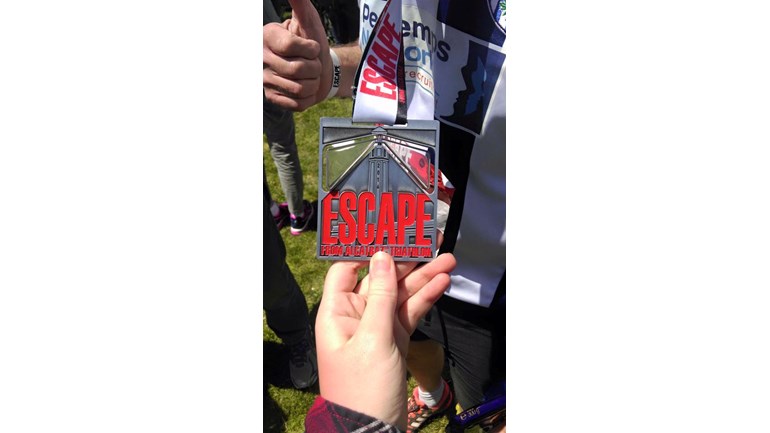 Fundraising for The Albion Foundation

2016 begins with our annual bike ride, this time from Norwich city FC to the Hawthorns from 17th to 19th March 180 miles (they tell me its flat!) 3 points like last year would be a bonus.

12th June Tony a friend (who needs enemies when you have friends like Tony) suggested another challenge!

ONLY THE TOUGHEST TRI THERE IS!!!! "Escape from Alcatraz"

The Escape from Alcatraz Triathlon begins with a 7:30 am plunge from the San Francisco Belle into the icy cold water adjacent to Alcatraz Island. Participants are unloaded from the boat in less than 8 minutes. It is quite a rush when you take the leap from the ferry for the 1.5 mile swim. Triathletes will face strong currents and 55 degree water temperatures. Wetsuits and hoods are recommended. The swim finish is at the Marina Green Beach adjacent to and west of the St. Francis Yacht Club.

Mounting their bikes at the Marina Green, triathletes will begin the out-and-back 18-mile ride by heading west toward Crissy Field via Marina Boulevard. They will climb to Lincoln Blvd. traveling through the Presidio to Camino del Mar. They will then climb up the hill to the Palace of the Legion of Honor. They will come down the hill and make a hard right turn on Clement Street and ride west to Seal Rock Drive. They will make a sharp downhill left turn onto 48th street and then a right turn west on Point Lobos Drive and ride South on The Great Highway to Golden Gate Park. Triathletes will enter Golden Gate Park from John F. Kennedy Drive onto Martin Luther King Jr. Drive. They will then turn left on Transverse Drive and make another left turn onto John F. Kennedy Drive and ride back to the Great Highway on the north side of the park. After going north on The Great Highway, they will retrace the course back to the Marina Green for the transition to the run. Triathletes risk disqualification for drafting and forward motion to the left of demarcation cones.

On tired legs, the triathletes will begin the 8-mile run to Baker Beach Battery by leaving the Marina Green running west toward Crissy Field to Fort Point below the Golden Gate Bridge. From Fort Point they battle the Presidio Headlands up and under the Golden Gate Bridge through the tunnel and onto the Coast Trail. Runners will run next to the Coastal Defense Batteries (Gunnery Locations from the turn of the century) until they reach Lincoln Boulevard just past Battery Dynamite. They parallel Lincoln Blvd. on the narrow trail above the Coastal Bluffs to Baker Beach where they return to the shoreline below. They will encounter the deep sand of Baker Beach to the turn-around point and back until they reach the dreaded Equinox Sand Ladder (400 steps up the cliff). This experience will drain the legs of even the best professionals. Runners are urged to use the hand cable to help them walk up the stairs. The stairs are to the run what the currents and waves are to the swim. After reaching the top of the Equinox Sand Ladder, runners will go left on the Coast Trail and back to the finish line via Lincoln Blvd. Runners will follow their path back under the Golden Gate Bridge, pass Crissy Field, and finish in the grass at Marina Green among thousands of cheering fans.