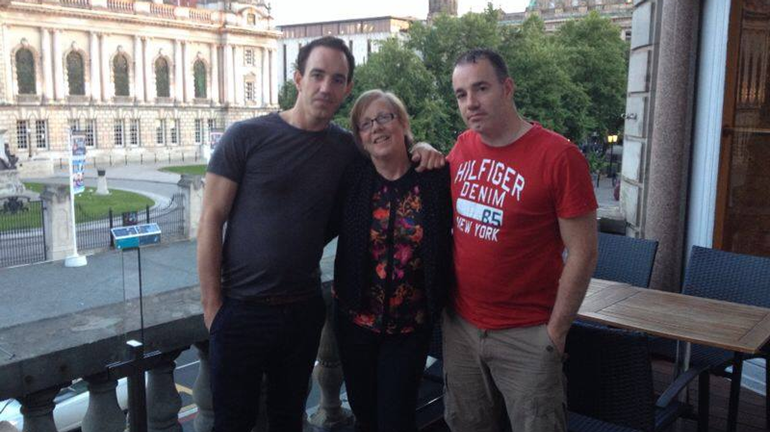 Swimathons, marathons, triathalons and an IRONMAN for Marie Curie because they do amazing work and make a difference.

Thanks for taking the time to visit my JustGiving page.  The 15 ULTIMATE challenges I have set for myself in 2015 include 2 swimathons (8.5km), both the Belfast and Derry marathons, 5 triathalons, 3 cycle races (225km), the Dublin Half Iron Man and finishing with my first ever Iron Man in Barcelona on 4th October 2015!  The training miles alone for this are almost 4000 miles!

My mum, Bridie, was diagnosed with lung cancer in late 2013.  She was given 3 months to live.  I can't explain the shock and impact this had on my family.   My mum was and to be honest still is, the rock and foundation, from which I try to live my life each day.  She taught me so much and I miss her more than words can say.  I talked to her about everything and anything.  We had a glass of wine together, we went for meals together, we went for walks together and we confided in each other.  I held her hand in Belfast City Hospital as she started her radiotherapy treatment in late 2013.  I can't explain how that felt. The impact this has on so many people, all walks of life and all ages.

Although my mum was given a prognosis of 3 months she didn't pass away until 10th October 2014, almost a full year later - proving just how tough she was and never complaining once.  In that year, I believe I only seen her shed a tear twice and it broke my heart to see.  She was more concerned about how we would cope than about herself.   It was my mums wishes to die peacefully at home and I am happy to say this was made possible for her by the help of a great circle of friends, family and above all, by the powerful work of Marie Curie.   The Marie Curie nurses came in to our home and provided expert care, guidance and support to my mum and to all our family.  It is only when your family are  faced with a terminal illness do you truly understand and appreciate how Marie Curie helps and makes a difference.  They help people get the most from life, in the time they have left.

I have set myself this ultimate challenge because I want to give something back to Marie Curie.  Donating through JustGiving is simple, fast and totally secure. Your details are safe with JustGiving – they’ll never sell them on or send unwanted emails. Once you donate, they’ll send your money directly to the charity. So it’s the most efficient way to donate – saving time and cutting costs for the charity.

You can also donate via JustTextGiving , simply text POHA75 followed by £2, £5 or £10 to 70070.  This will automatically update onto this JustGiving page.