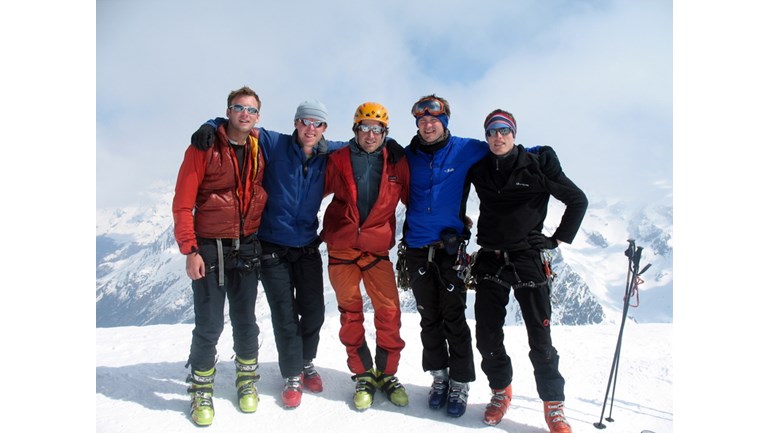 Broad Peak (8051m)
Broad Peak is the 12th highest mountain in the world and is part of the Gasherbrum group in the Karakorum in Pakistan.  Originally know as K3 it is known by some locally as Faichan KangriIn. In June 2011, a team of 6 Brits will set off to Pakistan to attempt to climb this peak. The team aim to summit, without guides, without porters and without oxygen. It will be the first time any of them have gone to 8000m and will be a big test of thier physical and mental strength. If they succeed they will be the 9th - 14th Brits to stand on the summit. To find out more about this mountain follow:- http://www.summitpost.org/broad-peak/151330

All money raised will go toward the Disaster Emergency Commitee who are helping those effected by the horrific floods in Pakistan last year. To find out more about what they do follow this link. http://www.dec.org.uk/who_we_are/

The Team
The team of 6 British climbers are based between Manchester, Geneva and Chamonix
John Roberts, Scott Mackenzie, Duncan Robinson, Rob Adie, Ben Wolstenholme and John Mason.
The Team
John Roberts - www.jr-climbing.co.uk
John has climbed extensively in the UK, Europe, Africa and in the Alps and is an accomplished trad climber with first ascents and repeats up to E8. He has also completed a number of triathlons, mountain marathons and ultra races including Ironman UK 2009 and the Sahara Marathon 2007.  John is also organising a ski-mountaineering expedition to Mt Damavand in Iran, March 2011.  John works in education consultancy and is the director of TREE Education Consulting.
Scott Mackenzie - www.fightgravity.co.uk
Scott has extensive experience across the Alps, South America and the Himalaya.  Scott is an accomplished mountaineer and trad climber.  Scott has made a a number of solo ascents in the greater ranges.  Scott is also attempting to ski Mt Damavand in March 2011.  Scott works in the IT industry and is the Director of S8 Consulting.
Duncan Robinson - drsmountainblog.blogspot.com
Duncan is an accomplished mountaineer and climber in the UK, Alps and South America.  Duncan has also completed a number of triathlons.  As chef d'expedition at La Rosey school in Switzerland he organises weekly expeditions.
Rob Adie - community.thebmc.co.uk/Profile.aspx?id=11
Rob is a strong winter climber and mountaineer with a good track record in Scotland and Alaska.  Rob has also completed a number of triathlons including Ironman UK 2009.  Rob is the Climbing Walls Officer for the British Mountaineering Council.
Ben Wolstenholme
Ben is a strong fell runner, triathlete and mountaineer with extensive experience in the UK and Alps.  Ben has completed a number of races including Ironman UK 2009 and Sahara Marathon 2007.  Ben is a construction manager at Morgan Sindall group.
John Mason
John is an accomplished ice climber and mountaineer having completed numerous season in Norway.  John also has significant trad climbing experience.  John is a director at JMC Fire Safety Consultants