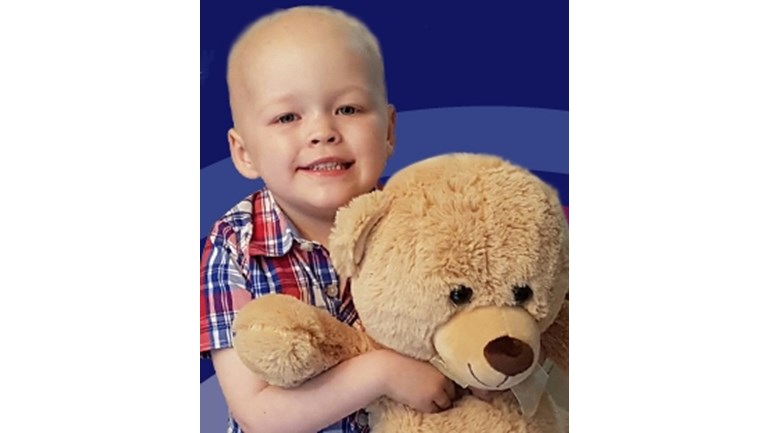 Carter is an outgoing, confident and sociable little boy who always does what he’s told and is genuinely never naughty! Full of energy and happiness from the minute he wakes up, he really enjoys horse riding, swimming, soccatots, riding his bike, crab fishing, driving the boat and playing on our favourite beach in the world – North Sands Beach, Salcombe. Carter is also an avid fan of Spiderman, Batman, Paw Patrol and Scooby Doo! But his most favourite thing is probably running – he is so fast that he won ALL 3 races in his school sports day last July!

We all work so hard for our children to be happy, fulfilled and enjoy care free lives so it really is every parent’s worst nightmare to be sat down and told that their child is seriously ill. On the 11thJanuary this year we received the devestating diagnosis that our gorgeous little boy Carter has Acute Lymphoblastic Leukaemia and the road ahead is 6-9 months of intensive treatment followed by 3 years of maintenance treatment. Suddenly your whole life stops in its tracks. However, with the amazing work of the Oncology Consultants and nurses of Birmingham Childrens Hospital, his prognosis is very good at 90% success and this is all we focus on…

Carter has been so incredibly brave so far. At only 4 years old, he understands how vital his wigglys (central lines) are and is very careful with them, he accepts his magic sleeps on a weekly and sometimes twice a week basis, he quietly takes his medicine and treatment in hospital and one of the most touching things is that he appreciates why he needs to drink 1000ml fluids every day and he works hard to reach that and often checks that ‘mummy has added it to the list!’ He knows that his factory is broken and is making poorly blood and that we need it fixed to make new blood, or Spiderman blood as we call it... He knows he has a lot of weeds and not many flowers so when our consultant told us he could see a few flowers, Carter said ‘that’s good Mummy, I think they like the medicine we are giving them.’

As Monica carries on with her school, swimming, horse riding, parties and other fun things, Carter never even says anything but instead asks her if she has had a good time! On top of this when we ask him how he’s feeling he just says ‘good thanks.’ Even when you know his mouth, legs, feet and tummy are sore. He never even mentions his sore back after the lumbar punctures and bone marrow tests and he hasn’t even cried about not being able to walk… When all of his hair fell out last weekend he just said ‘that’s OK as we won’t need to wash it in the bath now will we?’ Such strength from a 4 year old who adds daily to his list of things he wants to do when he is better!

This coupled with the over whelming love and support we have
received from family, friends, the school and colleagues has really moved Matthew and I. Everyone is so keen to help and do something that it has led us to set up two charity avenues; one via this page and one via Birmingham Childrens Hospital. Further details can be seen on Carter's blog - www.carterthebrave/fundraising. All proceeds from both avenues will go to the Oncology Ward of the hospital to try and help all the children in there. We feel that it gives everyone (including us) an opportunity to help not only Carter’s plight but that of so many more children in Oncology.

It's bewildering and unsettling for anyone going into hospital but especially for children and that is why we are a fundraising hospital. We raise funds to enhance the experience of our patients by providing state of the art medical equipment and facilities and creating a child-friendly environment.