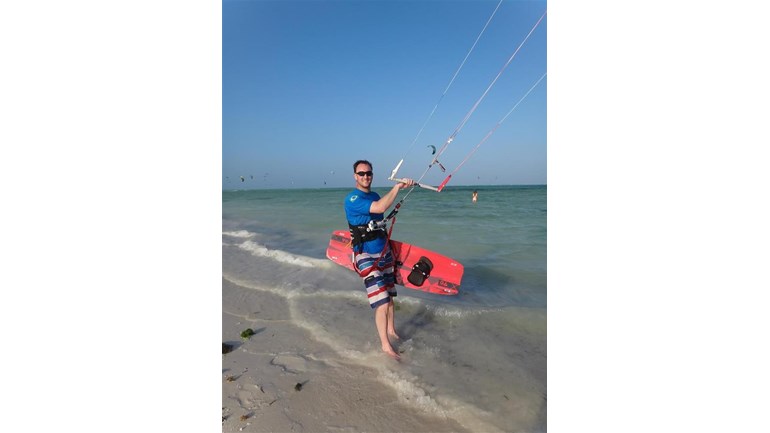 Simon's Kiteboarding across the English Channel

To raise alot of money for a great cause..... for Peters & May Foundation because I want to do something a little different

I have been kiteboarding since 2005 when I took a trip to Brazil. Since then I have enjoyed the sport in some of the most amazing parts of the world (Turkey, Madagascar, Zanzibar, South Africa, Turks and Caicos, Morocco to name a few). Its a great sport and I feel it is time to put my enthusiasm of the sport to a better cause than just my own enjoyment.

Weather permitting Myself and a great friend and fellow kiteboarder, Wiebbe Bonsink will kite across the Strait of Dover. The direction (UK - France or v/s) will be decided closer to the time but it is expected to take around 4 hrs, with strong winds and large waves expected in the middle of the channel, not to mention it being one of the busiest shipping lanes in the world.

In 2012 Sir Richard Branson completed the same task to celebrate his 60 birthday. As long as we can beat his time (record breaking at the time), we'll be happy. Can't have a 60 year old man beat me!

Lizzie has already bought me my waterproof pouch as of course I need to keep my passport on me!

Established in 2018, the Peters & May Foundation is born out of a heritage with charitable roots. Underpinned by over 10 years of charity work in the name of Peters & May, fundraising has been something at the heart of Trustees interests for a long time.Over the last 5 years, Peters & May have raised £100k, working closely with charities such as the Breast Unit Charity, Cancer Research and Teen Marine. Whether fundraising through activities such Peters & Mays Annual Clay Pigeon Shoot, donating towards education for water safety, or even running the London Marathon, our teams have made huge steps in helping support deserving charities throughout the UK.With an enthusiastic commitment to take fundraising to the next level, the Peters & May Foundation was established in 2018 under its own identity as an official UK certified charity. Supporting a variety of charities, our ongoing mission is to raise funds and awareness for those working towards a better future.

run by
Peters & May Foundation

Through sponsorship's, events and fundraising activities we are driven to help those striving for a better future, whether working towards a cure for cancer or providing education for the next generation. A belief in giving back is at the core of everything we do.

Charity Registration No. 1178130
Find out more about charity fundraising