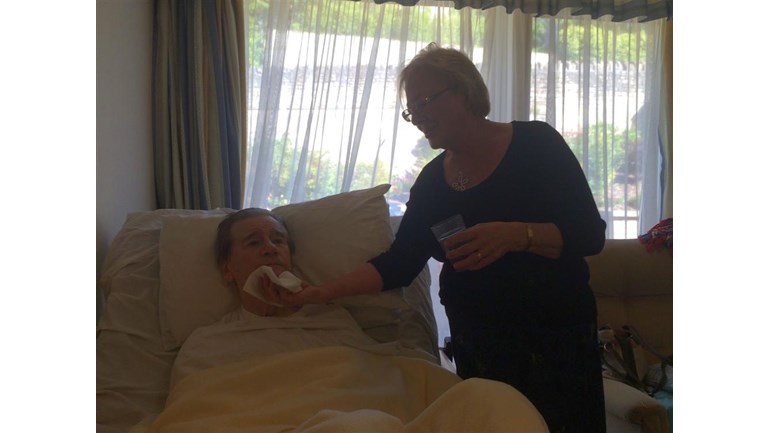 The Bath Half Marathon, 13 March 2016 for Alzheimer's Society because my dad's story is one of thousands.

Despite this I'm running* the Bath Half Marathon in March 2016. Having discovered that the internet means you no longer have to knock on people's doors with a dog-eared sponsors' form and then go round collecting the fifty pences afterwards (a game-changer for disorganised nitwits like me), I'm also going to try and raise a few quid for the Alzheimer's Society.

My dad - the funniest, cleverest and best man I know - is in a care home in Bath having been diagnosed with Alzheimer's three years ago. I could go on about the effect this living bereavement has had on our family, but it's not about us.

Most importantly the disease has robbed my dad of his past and his future, while his present - being hoisted in and out of the bathroom, being spoon fed his meals, talking a constant stream of nonsense - isn't exactly much cop either.

That's cruel enough, but equally callously he has nothing to look forward to either. The daily visits from my mum give him company, he sometimes taps his fingers along to the modern jazz records he always loved when we put them on the CD player, but that's about it. He spends many days just sleeping.

Alzheimer's is responsible for a callous triple-theft - the past, present and future of this brilliant, kind, funny, hardworking, quiet, thoughtful and dignified man.

So I'm doing this run for my dad, my hero, in the town where he lives in a bright, airy building full of amazing staff on a hill that'll be looking down on me sweating, swearing and wheezing my way around the streets of Bath on March 13.

My dad is not even half the man he was but he's still twice the man I'll ever be. Hence if you've a spare couple of quid to help the Alzheimer's Society's research into stopping these cruelest of multiple larcenies from good people like George Connelly, then, well, there's a hearty handclasp and a salty lick in it for you from me. Whether it's fifty pence or fifty smackers, the salty lick will be administered with equally grateful vigour.

Thanks folks. You guys are the absolute business. *finger guns*