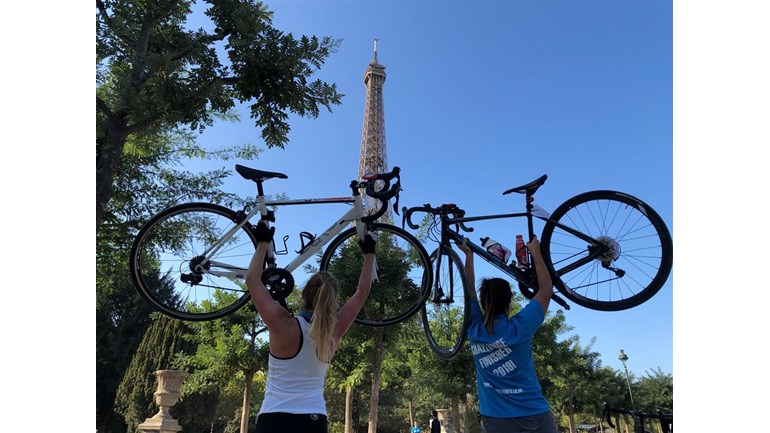 We are cycling from London to Paris in 3.5 days for Bowel Cancer UK because we want a challenge and are crazy!

I am someone who since the start of uni in 2001 I haven't really been into the gym.  I’ve not owned a bike since the age of 9, I can’t run very well and swimming quite frankly is too time consuming. So you may ask me why I’ve signed up to cycle from London to Paris .....

I’ve always wanted to do something awesome and challenging for charity but have had the excuse of having two children under the age of 4 that keep me busy to actually do anything until now.

8 weeks ago my dad called me after having a colonoscopy and he said the word I never wanted to hear ‘CANCER ‘.  “They have found a few polyps in my colon and unfortunately one is cancerous”. I was at work expecting my dad to say everything is fine it's just a check-up... I was in total shock!  I don’t think anyone in the family slept properly for the next 10 days worrying and waiting for the results of the biopsy to see whether the cancer had spread. You hear of the word cancer all the time, but you never think it will happen to you and your family!

If anyone knows my dad - they know he’s already had a lot of health problems – a  heart valve replacement, an infection in his stomach .He’s had pneumonia twice, kidney and blood problems and he visits the
doctors surgery weekly to have blood taken out of his arm but all of this has never ever stopped him being the life and soul of any party, the hardest worker and the best friend and father any girl could ask for.

Dad's tumour has now been removed, after a 7.5 hour operation, an unexpected stint in intensive care with a post operation chest infection and knee infections i'd love to say the cancer has gone but unfortunately 2 lymph nodes out of 16 are showing signs that its still kicking around so chemo discussions are underway! :-(

Now you know why I want to get on my bike and ride 300 miles in 3.5 days. I may be the slowest, I may ache in places I never knew existed but I want to raise as much money as possible for a cancer charity that is saving my dad’s life.

When Charlotte told me she had some ‘bad news’ about her Dad and I read through the rest of the text, my heart began to sink.… I’ve known Paul, Charlotte and the rest of the family since I can remember and they have very much been my own family, their second daughter as they like to call me. They have taken me in and offered me a roof over my head when I was going through my own problems and continue to always be there for me whenever I need.

Cycling from London to Paris is very much going to be a challenge for me, I know this as I have tried and unfortunately failed once before. No one likes to admit failure or defeat but I was naïve, thinking I’m physically fit and had previously ran a marathon before so this would be easy. It was not, so I know I’m not in for an easy ride (pun intended)!

Every day we are ultimately faced with challenges and seeing how the Bovey's have coped with Paul's cancer has been inspiring and has made me want to attempt the gruelling 300 miles again. Getting to the Eiffel Tower and raising as much sponsorship as possible towards this great charity, I know will really help others and Paul while he is going through his operation and recovery.

How common is bowel cancer?

Please dig deep if you can...

Wish us luck, we will need it.