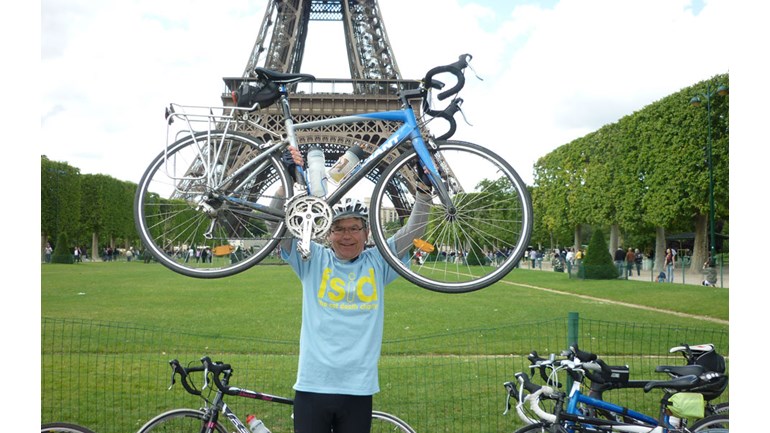 Fundraising for The Lullaby Trust

Thanks for clicking through to this page to hear more about why I am aiming to cycle 320 miles from London to Paris over four days from June 15.

Partly it's a mid-life crisis thing as, despite pledges to my family to stay clear of Lycra (it really is not a great look!), I've got into road biking and have joined the ranks of Mamils clogging up country roads on Sunday mornings.

But mainly it is to raise money for a cause that is very close to my heart, to help pay a debt to an organisation that helped me and Liz through some really tough times and above all to remember our beautiful first baby, Tom, who died aged just six and a half weeks in a cot death.

We have never understood why Tom died. He was a healthy baby, doing very well and, apart from the usual anxieties of first-time parents, we took it for granted that he would continue to prosper and thrive. The post-mortem confirmed our view that he was a healthy baby.  This is why Tom’s death is classified as Sudden Unexplained Infant  Death Syndrome and in 1988 – the year that Tom died - it was the most common cause of death of babies aged between one month and one year claiming the lives of 2000 babies.

The very night that Tom died we received a visit from two women who had also each lost a baby to cot death and who worked with the paediatric unit of the hospital where Tom died to visit and counsel other bereaved parents. I often think that their kindness and well-informed empathy were what separated us from total breakdown. They were our first introduction to the multi-faceted work of the Foundation for the Study of Infant Deaths - or The Foundation as we came to call it.

In the months and years that followed Tom's death we drew on the Foundation in many different ways – from being put in touch with other bereaved parents to form our own support groups; from a knowledgeable and sympathetic helpline number that we could call on for all sorts of questions, from their advice on coping with the anxieties of caring for our subsequent children who we feared were just as liable to stop living as Tom had been; and, finally, from being kept up to date with the very latest medical research which might help us to understand why our apparently completely healthy baby had died.

But the Foundation’s work is not just with supporting bereaved parents. It is the principal funder in the UK of medical research into the problem and it works closely with relevant health and police authorities to improve investigations following a death. It campaigns for greater public awareness of the risk factors which may contribute to cot death. Around the time that Tom died opinion was divided about the best sleeping position for babies but evidence was emerging that babies sleeping on their backs were much less at risk of cot death than babies sleeping on their front or on their side. When the evidence was clear-cut the Foundation launched one of the most successful public health campaigns ever in the UK to encourage parents to put their babies to sleep on their backs.   Today cot death is still the most common cause of infant death, but the death rate has fallen dramatically from 2000 babies a year at the end of the 1980s to around 300 a year today.

I hope you will agree with me that this is a very worthwhile cause that has made a real difference to thousands of people’s lives and I hope you will not mind me asking you to sponsor my London to Paris bike ride in memory of Tom. I have paid for all the expenses of the trip myself so every penny you donate will go straight to the Foundation.

Well, despite some pretty horrible weather at times (it was the windiest weather that the expedition leaders could remember) , we all made it to Paris and the sun emerged to smile on our ride round the Arc de Triomphe, down the Champs Elysee and on to the Eiffel Tower. Thank you so much for all you support: your generosity was a fantastic motivator when biking against the wind and rain through the enormous fields of wheat and potatoes that seem to cover so much of northern France.  We also biked through some lovely countryside and I met lots of wonderful people, all raising money for their own special charities; I only got two punctures, my legs felt fine and I didn't suffer from any of the unspeakable afflictions associated with four days sitting on an uncomfortable saddle! Merci donc à tout le monde!