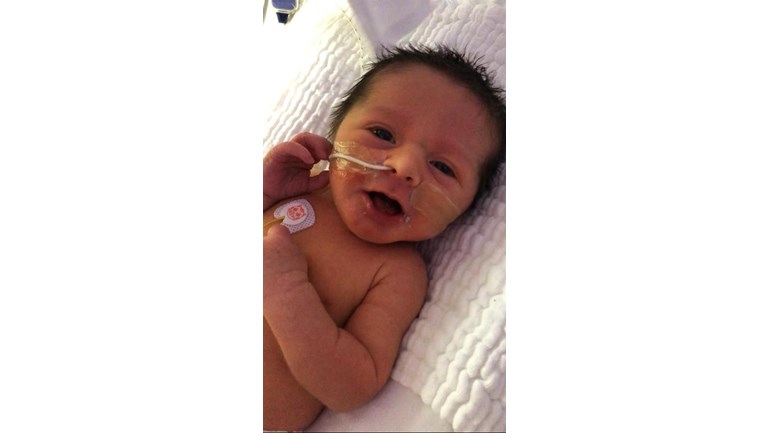 My son Leo was born on 27 November 2018. My wife was given a ‘pessary’ and induced to help start her labour. We were told it could be some time until anything was to happen and so we would be reviewed the next day to see how things had progressed overnight. However, within 20 minutes of having the pessary, my wife had a bad reaction and went into hyperstimulation, which caused Leo’s heart rate to exceed 220bpm.

We were rushed to theatre within an hour for an emergency C-section. The experience was overwhelming with around 10 people in the room who were on-hand for the procedure. Shortly after our arrival, the operating alarms started going off and suddenly there were double the amount of people in the room.

Once Leo was out, we heard one cry and then we did not hear him anymore, as he was rushed away. At this point, all we could hear were the doctors counting 1, 2, 3, 4, in their efforts to resuscitate our baby boy, as he had been starved of oxygen and was not breathing. 45 minutes went by without us knowing if Leo was ok – it was heart breaking.

To our relief, the doctors were able to resuscitate him, and we were admitted to the Trevor Mann Baby Unit (TMBU) which is above the maternity unit, where he spent the next 10 days with one-to-one care from the dedicated doctors and nurses.

Eventually we were allowed to go home but days later, Leo was admitted back to the Royal Alexandra Children’s Hospital (the Alex) with a fever. He was put on a monitor as his oxygen levels were very low, so required extra support. We spent the following three weeks in hospital with Leo, during Christmas and New Year, during what was a difficult and anxious time.

The staff at the TMBU were absolutely amazing; they saved our baby boy’s life and helped us so much. Again, during our time at the Alex, the staff were absolutely amazing we cannot fault any of them. Whilst we were in hospital at Christmas, we were given a special festive hamper full of treats and on Christmas Day, were given a Christmas dinner which made a very difficult time, a little bit better. We found out that the hamper and dinner were provided through an initiative called ‘Aidan’s Christmas Dinner Project’, supported by Rockinghorse children’s charity.

After three weeks, we were discharged from the Alex, with Leo reliant on oxygen until he could breathe on his own. It’s a real struggle as you don’t get taught about these things in baby classes and books. The focus is always upon the ‘normal’ and straightforward labours and after birth care, but the reality is that not everyone is going to be fortunate enough to have that.

I wouldn’t wish our experience on anyone; it was, and still is, the hardest thing me and my wife have had to go through, and we couldn’t have done it without the help from the Alex, TMBU, Aidan’s Christmas Dinner Project and Rockinghorse. If you can donate to my JustGiving page, I would be so grateful for your support in helping this amazing charity.

Rockinghorse is a Brighton-based charity which has been supporting children for over 50 years. It was set up in 1967 by Dr Trevor Mann to improve healthcare services for sick children and babies. The charity fundraises for items for every child's treatment, from toys to life-saving equipment.

Charity Registration No. 1018759
Find out more about charity fundraising