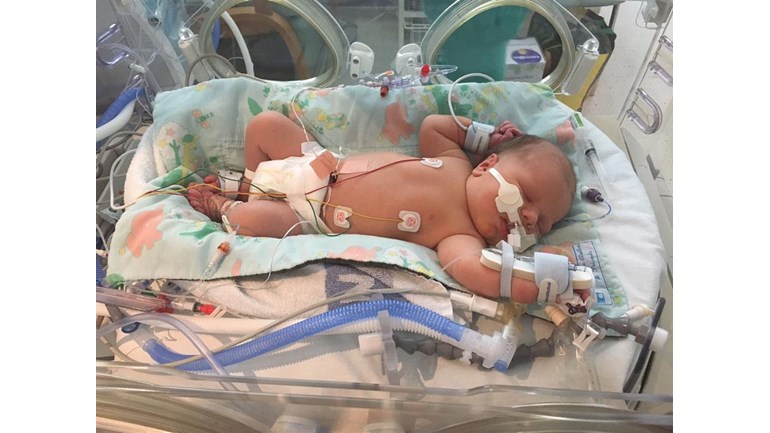 I am running the Leicester Half Marathon for The Sick Children's Trust because of the amazing support they gave us.

On the 22nd April baby Jude was born at 17:17 weighing 7lb 14 and a half ounces at the Leicester General Hospital. After a few episodes of reduced movements unfortunately Jude was born very ill with sepsis and showing signs of respiratory distress, therefore had to be rushed to the neonatal unit on site within the General.

When Jude was born he didn't cry instead he grunted with every breath. After being in the neonatal unit they started antibiotics straight away via IV line in a cannula, it was clear how poorly Jude was as he was losing oxygen and had to be put on c-pap to help with his breathing. After 24 hours of having c-pap Jude was still not making any improvements and the decision was made to transfer him to another hospital as by now he was high dependency (Level3) and the General are (level 1). He was intubated with a ventilator and was needing 60% oxygen and was given a dose of curosurf, with this came putting him on morphine and shortly after came dopamine as he kept getting low blood pressure.

Jude was transferred via ambulance on 24th April to Addenbrooke’s Hospital in the Rosie unit in Cambridge a (level 3 +) hospital to where Jude had 1 to 1 with a nurse at all times as he was in a high dependency unit in intensive care this was such a scary time for the family and meant being away from our daughter also.

During Jude's stay in Cambridge he was dependent on the ventilator for 5 days, his blood pressure kept dropping so he was given 2 saline boluses. While at Cambridge Jude had blood gasses every day to see how he was coping with his oxygen levels. Jude also had a long line in his leg, a feeding tube and wires into his tummy button along with wires to check his heart and lungs too. He underwent a head scan, heart echo, chest x-ray and a lumber puncher. We are very fortunate that all these tests came back fine for Jude.

After 5 days on a ventilator Jude went onto something called high-flow which again helped with his breathing and after became fully dependent on breathing on his own. The decision was made on 1st May after having a blood gas that he would be able to be transferred back to Leicester (Royal Infirmary).
On the 2nd of May we got to stay at the Royal with Jude and had our first night with him free of all his wires and medication this was also the day of his last antibiotics. On the 3rd of May they discharged us and allowed Jude to come home with still having neonatal check-ups every now and again to check his progress. This also meant on the 3rd of May was our first night back with our daughter Evie after 12 nights away from her (which was extremely tough).

We are so thankful that Jude came through this ordeal and made a full recovery as things could have been so much different.

At Addenbrooke’s they were absolutely fantastic and very supportive. The sick Children's Trust which is a charity that has come very close to our hearts allowed me and Craig to stay at the hospital.

The Sick Children’s Trust is not government funded and so money raised will be helping other families in similar situations to stay – which is why we're fundraising.