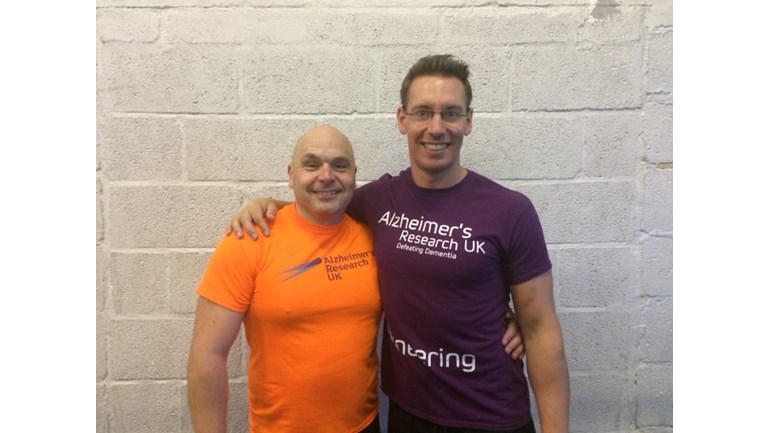 “We’ve signed up to Race the Tide”.

A conversation we've had now with a few people. Through this page, we can tell a few more people so thanks for sparing a couple of minutes to read this. To raise money for Alzheimer’s Research UK, we are going to walk, run nay stagger the length of St Cuthbert’s Way over the weekend of September 10th and 11th 2016. A 62-mile journey overnight in 30 hours. We like sleep. We wont however get any however we are alive, we are ready (ish) and we can’t wait to get to on with it. Ask us again on the Sunday afternoon.

I’ve got great support from a very good friend who is joining me. David Long, the Head Coach at Crossfit Cirencester who can perform feats of endurance and daring-doo both in and out of the gym. He proved his mettle and said he would do it in a heartbeat.

Training wise, I am a pilgrim at the altar of the CrossFit box. That’s a mixture of running, rowing, cycling, Olympic weightlifting, gymnastics and tons of other stuff that will get us through the 62 miles.

Training goes well. Well, for the sake of comparison, if you want to see what David is capable of, check out CrossFit Cirencester’s social media. Me .. well, I’m the one at the back wheezing his way across the country. Please help us and make a donation to a great charity working hard to beat Dementia, it will give us a huge push up the hills and down the dales.

Don’t do any of that until you have been to ARUKs website and had a good look around it. You will be educated on what Alzheimer’s Disease and Dementia is. Key things that we emphasise are the numbers involved. 850,000 people in the UK suffer from some form of Dementia. This number, as sure as eggs is eggs, will grow at a staggering rate. 1.4 million of us over the coming few years. Statistically, 1 in 3 people born in 2015 will suffer some form of Dementia. 33%. That’s a huge number of people that will have their lives, futures, retirements and whatever other plans we all make for our lives blatantly robbed from them without any mercy whatsoever. How can we smash these numbers?

There have been some superb developments in recent years. That has spurred us all on to do more, raise more money for research and ultimately, beat this disease down.

I lost my father-in-law, Ray at the age of 66 after a ten-year battle with frontal lobe Dementia. Doing the maths, that’s first signs in his early fifties. We were
told he had something else. Not these brutal, cruel and downright ugly diseases that have no known cures.

RTT 2016 is going to and really will make a difference to those startling numbers we will all more than likely have experience of in the future.

Thank you for reading. And donating if you did.