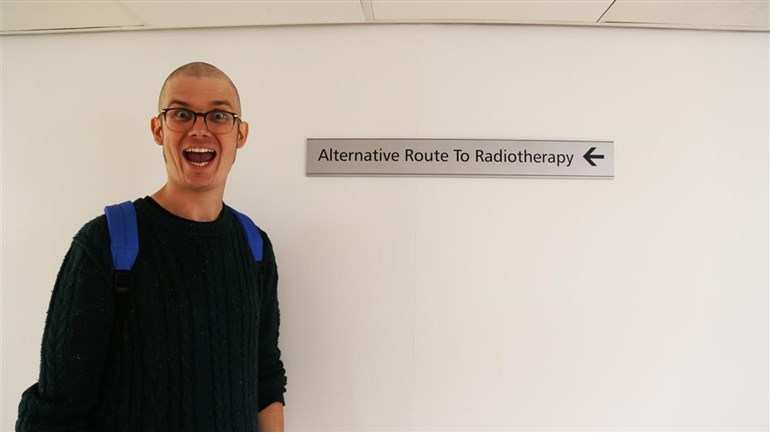 We empower people with cancer to make informed choices.


Dan was first diagnosed with a brain tumour in early 2015 when he had a seizure while driving (thankfully he didn't collide with any other vehicles and was completely unscathed). He was taken straight to A&E at Manchester Royal Infirmary where he was promptly given a brain scan where they found a 10cm tumour at the front of his brain. My worst fears have been realised! But this wasn't going to stop us from living a long and happy life together!!


Within 2 weeks, his brain was being operated on at Salford Royal by specialist neuro surgeon Ms K Karabatsou. Despite taking way longer than friends and family had been warned, the operation was a success. Hooray!

He was then handed over to Dr Tran at the Christie who put him straight on a 6 week course of radiotherapy. Shortly after he had completed this he had a scan which showed that the tumour had almost completely gone. YES!

Time to get married and have babies...


However, fast forward two years. Dan had been having 6 monthly MRI scans at the Christie just to make sure that his recovery was going according to plan. Unfortunately, we were informed that in a short 6 month period, 2 new tumours had developed. 1 at the original site where he'd initially had one and the other at the back of his head on his cerebellum right by his brain stem, making it inoperable. The main one at the front was quite a lot more aggressive, a stage 4.  This was obviously heartbreaking! What did we do wrong, why has this beast returned!!?


So once again, within a fortnight Dan was shipped off Salford Royal with the ever skilful Ms Karabatsou to debulk his front tumour and then back to the Christie. This time he would have a combination of both radiotherapy and chemotherapy. The combination of the two was almost too much for Dan to endure! He was sick everyday, he lost 3 stone and I was sick with worry! He was fading away in front of my eyes!


Upon this second diagnosis, I started doing a lot more research into "alternative" therapies and treatments. Based on months of research, Dan went fully vegan, started a mainly alkaline diet and cut out caffeine, alcohol and gluten. Will this be enough? Every cancer is different and there is so much conflicting evidence! We needed a second opinion outside the NHS.


Through homeopathist Em Colley, who we'd already been in touch with through a close friend (thanks Lauren!!) and Yes to Life, we were recommended to consult with renowned cancer specialist Patricia Peat. In our first conversation with her, we were highly recommended a specialist cancer clinic abroad that use a strict regime of hyperbaric oxygen therapy, heat therapy, pure IVs of vitamin B and C etc and a unique method of using glucose suppressors to starve the cancer cells of any sugar. Once the cancer cells are fully starvacious, Dan would then have a dose of "Insulin Potentiated Chemotherapy". This would mean the cancer cells would devour both the glucose and chemotherapy making it so much more targeted. They have an 80% remission rate!
Dan's options on the NHS are unfortunately very limiting and statistically survival beyond a few years is very low.


Dan needs a lot of help from a lot of people to continue with the treatment in Istanbul! Can you help?

It cost 6000 euros every 3 weeks for treatment. This includes, chemotherapy, hyperbaric oxygen, hyperthermia, supportive infusions, supplements and repurposed drugs. The chemotherapy would probably cost the NHS that alone.


WOW!! It's been 6 months and we've just got our third clear scan. BOOM! You have funded half a year of ground breaking and ultimately life saving treatment here in Istanbul, and we simply couldn't be more grateful. To everyone who's donated (no matter how big or small the amount), shared this page, put on events and gigs and generally been enormously supportive of our cause, we'd like to say...


THANK YOU SO BLOODY MUCH!!!


Dan has now been told he will have a decreased run of treatment for the
next few months of just 1 round of chemo, hyperbaric oxygen,
hyperthermia and supportive infusions every 3 weeks (as opposed to 2
weeks). This is great news, but still a very expensive process! We have
therefore upped our fundraising total to £130,000. This will cover all
treatment until the end of the year.

In light of this, we have made a little thank you video of us doing a
cover of The Bangles' "Walk like an Egyptian" or "Walk like a cancer
patient" as it is now called! Check it out -
https://youtu.be/VfezTtE4s7c

We provide information to guide people with cancer through the confusing options for care and lifestyle choices. Our aim is to help them make informed decisions. We simplify the complex and facilitate access to expert knowledge.

Charity Registration No. 1112812
Find out more about charity fundraising