Darren May
Fundraising for Friends of PICU 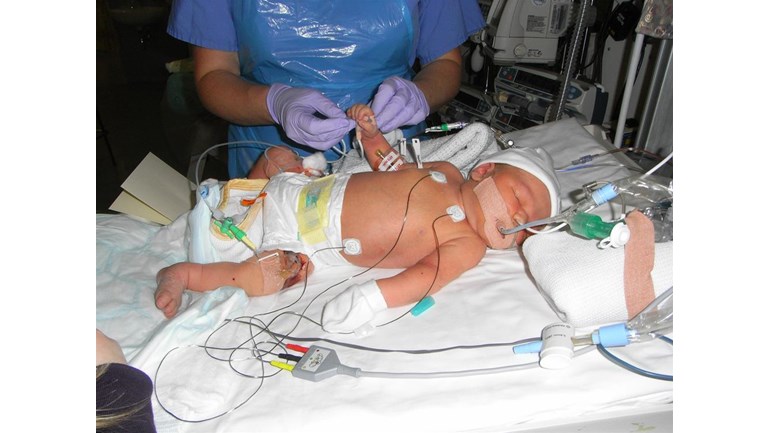 Kitty May Our Little Miracle

Me & Ben Golding are running in the GSR 25.10.15 for Friends of PICU because of a special little lady 💓

Thank you for taking the time to visit my site.

Myself and my family are raising money for this very special charity.

All this is in aid of Paediatric Intensive Care Unit (PICU) at Southampton General Hospital, which relies heavily on sponsorship and donations.

I had never heard of the PICU until 25th February 2009.  This was the day after my wife Nikki gave birth to our second beautiful daughter, Kitty, at home following a straight forward labour.  The Midwives left Kitty, Nikki, Keely, (4 at the time) and I cuddling up on the sofa when our delightful new addition was just a few hours old. I cannot tell you how happy I felt at that time.

Following an unsettled night where Kitty was very restless, wouldn’t feed and was quite irritable, it became apparent in the morning that our darling baby daughter had become acutely unwell. The events which followed have changed our lives forever.

We rushed Kitty to our GP to be examined and were promptly advised to make our way to our local hospital.  It was in Nikki’s arms just as she got to the ward that Kitty suffered a Cardiac Arrest.

In the hours which followed Nikki and I were told that Kitty’s signs were not good, if Kitty were to survive, the effects her body had suffered would be very likely to have caused severe brain damage. We were told to prepare to say our good-byes. There isn’t a parent alive who wants to outlive their children and here we were Nikki and I, possibly parting with Kitty so soon after she had entered our lives.

Later that day we were given a glimmer of hope.  There was one option which was a possibility. If Kitty could be stabilised she could be collected by the Retrieval Team from the PICU in Southampton this was the only place where Kitty could receive the specialised care which she so desperately needed. Without hesitation we agreed that we would support the decision to transfer Kitty. After a few more hours, the decision was made that the transfer had to take place. Kitty’s only hope was to make it to the PICU. The arrangements were made but it was made very clear to us that there was no surety that Kitty would survive the journey.

When we arrived at Southampton we couldn’t believe the equipment that surrounded our tiny baby. So many machines and lines which were explained to us sensitively and informatively. At this stage it was the machines and the expertise of the PICU team which were keeping Kitty alive.

Over the following 5 days the PICU worked tirelessly to keep Kitty going. They showed great care and understanding with Nikki, Keely and I and I have no doubt that it was their support, along with the love of our families and friends which prevented us from crumbling during those darkest of days.

We took hand and foot prints of our darling girl with the help of Keely. We took photos as we treasured every moment. We simply did not know how much time we would have with Kitty.

As the days passed, promising signs started to emerge. For every good sign there was a note of caution, but we could not help but be encouraged. Sedation was reduced and gradually ventilation was removed. Kitty was fighting for herself.

Slowly over those 5 days, Kitty went from being the sickest baby on the Unit to the most well baby. Kitty was transferred to the Neo Natal Unit in Basingstoke Hospital where she spent a further eight days. And then, at 2 weeks old, Kitty returned home. Her future was uncertain, but she was with us and words cannot explain how grateful we were then and still are today.

Kitty’s illness was caused by a condition called PPHN (Persistent pulmonary hypertension in a new born) this is a very rare condition which occurs when a newborn’s circulation system does not adapt to breathing outside the womb. To find out more go to www.persistent-pulmonary-hypertension-newborn.com

I will be forever indebted to the PICU and I hope you will understand my motivation for taking part in the Great south run raise funds for the Friends of PICU. The Unit offers states of the art medical care as well as exemplary facilities for the families of the children admitted.  All the staff there are exceptional and without their skills, care and dedication I am sure that Kitty would not be here today.

Not only is Kitty here, but she is a lively 6 1/2 year old who runs around, who has hit every milestone and exceeded all the expectations of Nikki and I and the professionals. Kitty astounds and amazes us on a daily basis

The Paediatric Intensive Care Unit (PICU) at Southampton General Hospital is the regional centre for the South of England. It is a purpose built unit which presently is open to 14 beds with an 15th bed due to open shortly, however it has the ability to expand to 16 beds in the future.

More than eight hundred children are admitted each year, many with serious illnesses, following major surgery or massive trauma following road traffic accidents. Children from newborn to 17 years are cared for on this specialist unit. They recently obtained a second ambulance to add to the unit enabling them to have one for retrievals and one for transfers.

On behalf of me, Nikki, Keely and all the family we would like to thank everyone who made a difference to our lives; to the staff at PICU also all the staff on Charlie’s day unit (G2) and Neo Natal in Basingstoke hospital, we will be eternally grateful for what you have done for us. Thank you.x

Kitty will be 7 in February next year and is just Amazing. She has Astounded the medical staff at both Basingstoke CDU & at Southampton PICU Thank you to all of them again as without there intervention and medical skills and care Kitty would not be here today and Kitty has now been discharged fully from hospital outpatients.

Thanks for taking the time to visit my JustGiving page.
Donating through JustGiving is simple, fast and totally secure. Your details are safe with JustGiving – they’ll never sell them on or send unwanted emails. Once you donate, they’ll send your money directly to the charity and make sure Gift Aid is reclaimed on every eligible donation by a UK taxpayer. So it’s the most efficient way to donate - I raise more, whilst saving time and cutting costs for the charity.So please dig deep and donate now and keep this unit going.