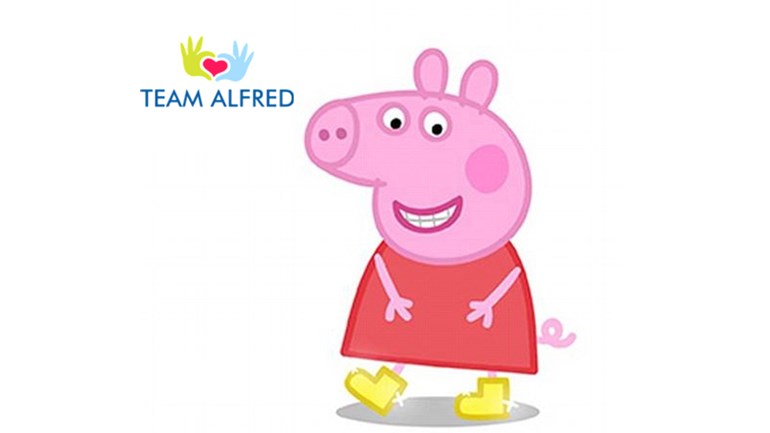 We offer free Conductive Education to children with motor disorders

There is a little lad called Alf who needs a little extra help.
STEPS play a big part in providing the right support to not only Alf but
his family.

On Sunday 3rd September Lullington Park Cricket Club is hosting a charity event for STEPS and Alf.  To support the day I thought of many ways that I could gain sponsorship(running, cycling or swimming) but overwhelmingly friends and family wanted me to challenge myself.  So, it was decided I should be taken out of my comfort zone and spend quality time with children dressed as Peppa Pig for the day.

On September 11th 2015 Alfred George Chapman was born. Sadly 25 minutes before he was born his heart rate dropped significantly. He had the umbilical cord wrapped twice tightly around his neck. He was born flat (unresponsive) with only a low heartbeat so the antenatal team began resuscitation. 7 minutes after birth he took his first breath and was quickly ventilated. We didn't see our son again for over 3 hours, we were just told he was very poorly. Unbeknownst to us at the time, Alfred had suffered lack of oxygen to his brain, otherwise known as Hypoxic-Ischemic Encephalopathy (HIE). To prevent the spread of any brain damage that might have accorded, he was cooled to 33.5 degrees Celsius for 72 hours. This meant he had to be transferred to Nottingham Queens Medical Centre’s Neonatal Intensive Care Unit. On the way there, Alfred suffered a seizure which was a sign his brain had been affected. When we arrived at the unit, we were told his brain activity was not looking good. That was the hardest and worst part of our story. Hours later our little boy went into full fighting mode. He pulled his ventilator out less than 12 hours after being born and began breathing on his own. Over the next three days he was awake and cold most of the time in his incubator. 72 hours since he was born he was warmed up and we were finally able to cuddle our precious son. Later that day he was sedated and taken for an MRI scan to see how HIE had affected his brain. At 5 days old we were told Alfred had acute brain damage to two areas of his brain. They couldn’t however tell us how or if this would affect him later in life. We could only wait and see. At 10 days old we were finally established oral feeding with Alfred and we got to take him home. We had all the hope in the world this was the end of our emotional start to parenthood. He had all good reactions for a newborn baby and even started smiling at a week old. Everyone who knows Alfred knows what a flirt he can be. Well that started very early on.
Due to his start in life his development was always going to be monitored just in case for 2 years. On January 14th 2016 we went for a check up with Alfred’s physiotherapist. I was slightly concerned he wasn't using his arms like other babies were, sadly I was right to be concerned. It was the first sign the brain damage has affected his physical development. Over the next few months his physical abilities progress and a snail’s pace. We soon realised this wasn’t just a development delay, it was more serious. Although we knew all the signs were pointing towards Cerebral Palsy, to say it out loud was very hard to come to terms with.
Cerebral Palsy (CP) is a neurological disorder which affects body movement and muscle coordination. CP is a massive umbrella term to describe a wide range of disabilities. Some may be very mildly affected, where as others have no control at all.
Alfred’s official diagnosis is Quadriplegic Cerebral Palsy with more right side affected. This means all four limbs are affected with body movement and muscle coordination but his right side is worse than his left. One side affected is known as Hemiplegic.
At nearly 2 years old he still hasn't got the muscle control to sit unaided, stand, crawl or walk. However we believe with a lot of hard work and the right input, he will achieve everything he wants to in time.
One of the most important inputs for us as a family has been Conductive Education at STEPS. This charity has taken away a scary dark cloud in our lives and made everything bright again. We take Alfred to classes at STEPS weekly, those classes focus on the child, not the disability. They are our life line and have helped with Alfred’s progress since January this year. We are so lucky to have met some amazing families through this charity, families just like us who want the very best for their child and hope one day they will develop the skills needed to achieve anything they set their minds to.
As a family we are a team and we will continue to work hard together to give Alfred the very best start in life.
Any funds raised through the Team Alfred fundraiser will be split between anything that will enhance his opportunities and STEPS as they desperately need funds to remain open and help families like us.

STEPS is a registered charity which provides specialist nursery services and support to children with motor disorders and their families enabling them to lead fuller, more active lives. We enable the children to develop their physical, emotional and communication skills in a relaxed environment.

Charity Registration No. 1063143
Find out more about charity fundraising