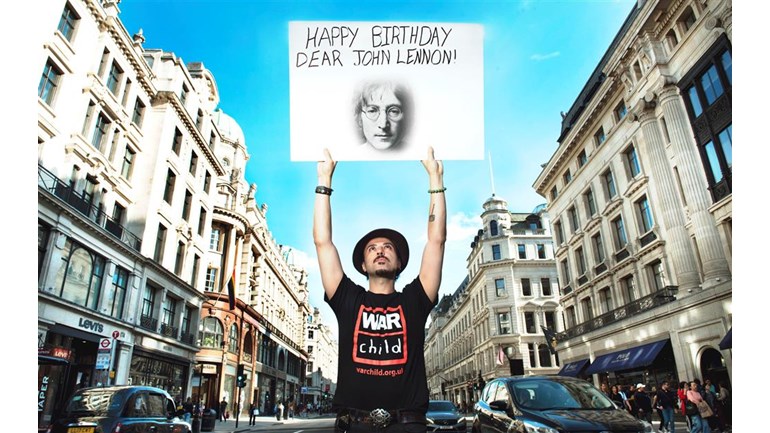 IN AID OF WAR CHILD UK

And it is fitting that this significant event was the idea of a millennial musician – Sepp Osley - who himself could have been the face of War Child. Sepp was born in war torn Iran in the mid 80’s, fled the country with his family and landed in Canada. He grew up to later become the co-founder, songwriter and front man of rock band Blurred Vision.

Reflecting on what it meant to put this show on, Sepp Osley wrote - "There is a great necessity for this incredible charity. They fight for those who have the smallest voice but the greatest of importance. They are here to let these children know that they are not forgotten. Having been born into a time of war and uncertainty, I am grateful to be able to do my little bit for this charity now as an adult and an artist.
I am also very excited to be able to put on this show and project to celebrate my great hero John Lennon, whose music taught me so much about the reality that the things that make us different mean very little in the end. The only thing that matters is our empathy towards one another and to know that attaining peace is not just a dream, but can be our reality, if we want it."

THE SONG - written by Sepp Osley and former member and brother Sohl, is a tribute to celebrate the legacy of peace left behind by the Beatle legend. It was originally released on the band's debut album 'Organised Insanity'.

THE VIDEO - accompanying the song brings together musicians from around the world including legendary artist Peter Gabriel who joined the campaign and is seen in the video alongside Paul Young, Marc Almond, Donovan, PP Arnold, Geddy Lee and many others.

The 'Dear John' fundraiser will run for an entire year in efforts to use music and social media to raise as much money and awareness towards the charity as possible.

Thank you to everyone out there who supports this project, who shares the video and the message and helps in the endeavour to raise money for War Child UK and giving aid to children affected by war.

Charity Registration No. 1071659
Find out more about charity fundraising