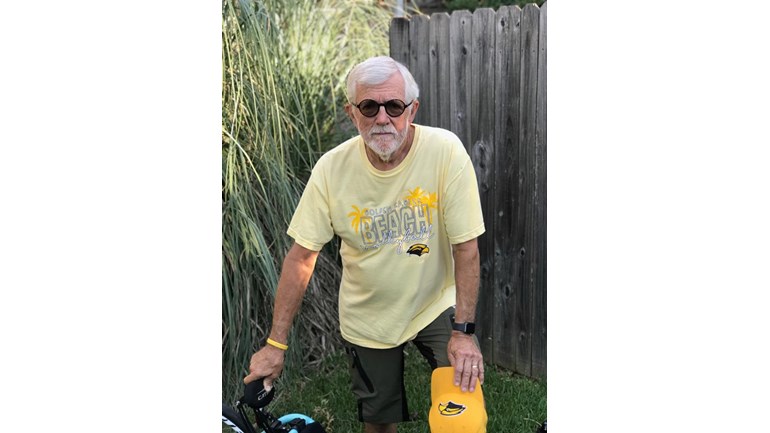 Thirteen years ago, I had the honor and privilege of donating a kidney to a dear friend, Rich Dean from Mason City, Iowa.  At the time, I was 67, and 79-year-old Rich was suffering kidney failure and about to require dialysis.  My kidney restored his life and gave him additional years of quality life.  What I got was every bit as good.  It was, and still is, the most rewarding and satisfying thing I’ve ever done.  Rich is no longer living, having fallen, suffering a fatal head injury.  I think about Rich a lot, how much he meant to both my wife, Kay and me, and how great it was to be able to help him.  This year in September, I am going to bike - as in bicycle, not motorcycle - from Iowa City to Hennepin County Medical Center in Minneapolis, where our transplant took place.  My goal is to promote living kidney donation, letting people know that this is an easy and wonderful thing to do.  There are over 100,000 people on the transplant waiting list, and what many people don't know is that you don't need two kidneys. So, share your spare!

I was a French horn professor at The University of Southern Mississippi before retiring in 2003.  I'm honored to have four Southern Miss graduates riding all or part of the ride with me, three of whom were French horn students of mine. My former students are Patrick Creel from Austin, Texas, Mary Wood from Salt Lake City, and Ginger Lai from NYC.  Also riding will be Megan Wilkinson, Assistant Director of Fraternity and Sorority Life, Ginger’s husband, Dan Kokoszka (pulling their 3-year-old daughter, Izxy, in a bike trailer), and Tony Arnone, Professor of Cello at the University of Iowa. My wife, Kaylene, will be our support team. I plan on opening up the ride to anyone else who would like to ride along with us (at a rather modest pace).  I will have turned 80 years old in August, and the message is:  if an 80-year-old former French horn player can ride a bike 300 miles having donated a kidney thirteen years prior, donating a kidney is not going to do you any harm, but it will give you many rewards!  In fact, chances are, you'll be saving a life.

Hennepin Healthcare Foundation has the honor of connecting the generosity of the community to the mission of Hennepin Healthcare. Caring for anyone at any time with any condition takes resources and a team of exceptional staff. Our unique position of being Minnesota's largest level one trauma center, safety net and public teaching hospital offers innovative ways to influence the health of our community. Generosity removes barriers to healthcare access, enhances the patient and family experience, and advances efforts in medical education, research and community health.

Charity Registration No. 410845733
Find out more about charity fundraising