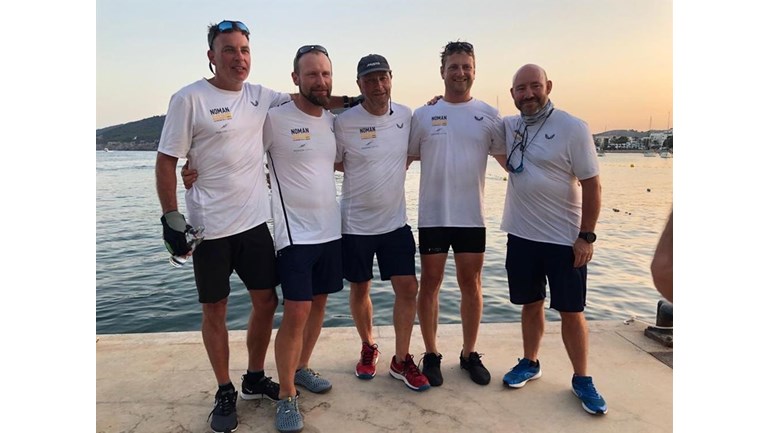 Dear family, friends and everyone else who has supported us,

A short note to say a massive heartfelt THANK YOU so much for your many, amazing messages of support. It was a great team effort not just by us as 5 rowers but also you all. You really kept us going throughout.
It was an amazing experience with many highs and lows you tend to experience in these long endurance events.The trick is making sure the highs outweigh the lows!!
The “lows” were - relentless heat, 2 hour “dog watch” rowing sessions in the small hours, cramped stifling conditions. The highs were - dolphins appearing at dawn to “cheer” us on, milky calm seas bathed in moonlight, wonderful supportive team camaraderie from a top bunch of rowing crew.

Well done lads - 3rd place (possibly 2nd after enquiry) - not too shabby for a crew with an average age of 50 and a course record to boot! Plus do not forget the small matter of c£50k raised between us in total to fight HPV related cancers.

Thank you all again so much for your support,
Nick & Chris
Post DW Race Update...

By anyone's standards, it is fair to say that the Devizes to Westminster
race this year was particualrly tough, with exceptionally warm weather
zapping the energy on the canal section and the lack of flow impeding
our speed on the Thames section.

Thank you to everyone for your kind words of support, encouragement, congratulations and contibutions. This truly was a team event and whilst Chris and I may have been the ones in the boat, this would  genuinely not have been possible without our dedicated support crew (Adrian, Des, Scott, Kate, Eric, Andy and Tam) who adapted to the conditions, keeping us fed and watered and pampering to our every need (with the exception of where Chris wanted Vaseline).

The video of me ‘getting out’ of the boat @Teddington sums up how we felt towards the end of the race, but you take away some amazing memories and special sights ranging from the beautiful sunsets along the canal and early morning mist on the Thames to the now customary swan attack, near misses of taking a short cut down a weir in the dark (twice), and an additional emergency portage at Marlow Bridge due to the discovery of some WW2 ordnance, the result of which was an early morning bath after being directed to a jetty which subsequently collapsed on top of us as we tried to get out (having just changed into warm clothes for the night section :-() - but that's all part of the 'DW experience'...

It became apparent early on that our sub-22 hour target was unrealistic considering the conditions, and so we set our sights on beating our time from 2017, which we managed by 80 minutes, so we'll settle for that - I like to think we were helped by my ‘Paddlemix’ playlist which included carefully selected motivational tunes such as Stayin Alive, Dancing in the Moonlight, Miami (Devizes) to Ibiza, Swan Song, Fantastic Day, Don’t Stop Me Now and Bonkers...  And, of course, Chris' emergency joke helped get through a dark moment.

In 2017, we completed the 125 mile non-stop Devizes to Westminster International Canoe Marathon, after a 19 year ‘sabbatical’. Thanks to everyone’s amazing support we raised a staggering £18,000 for The Royal Marines and St George’s Hospital charities.

As part of our latest challenge we had hoped to beat the time we set in 1998, although unfavourable weather conditions (see update below), meant the best we could settle for was a finish and an improvement on time from 2017 by an hour and 20 minutes.

Having replaced our paddles with oars, we began training in preparation for part two of our challenge, rowing non-stop in a race from Barcelona to Ibiza, a distance of 200 miles, although this time we have the luxury of a (slightly) bigger boat and three additional crew members…

Having upped the ante on the challenges, it seemed only reasonable to do the same to our fundraising target, so this year we are looking to raise £30,000 - This is where you can help…

If you would like to support us, the charity we are supporting is The NOMAN is an Island: Race to End HPV campaign:

For more information on the NOMAN is an Island Race please see:
www.youtube.com/user/nomancampaign
Thank you in advance for your support,
Nick & Chris

20-21 April 2019 - The ‘DW’ is the longest non-stop canoe race in the world and has been held annually over the Easter Weekend since 1948.  The route follows the Kennet and Avon Canal for 52 miles before joining the Thames for 55 miles to Teddington, with the final 17-mile section on the tideway to Westminster.

22-25 July 2019 - The NOMAN ‘Row across the Med’ race takes place every two years, pitting amateur teams of rowers against each other across open seas on a race that is expected to last 3 days…

Charity Registration No. 273217520
Find out more about charity fundraising