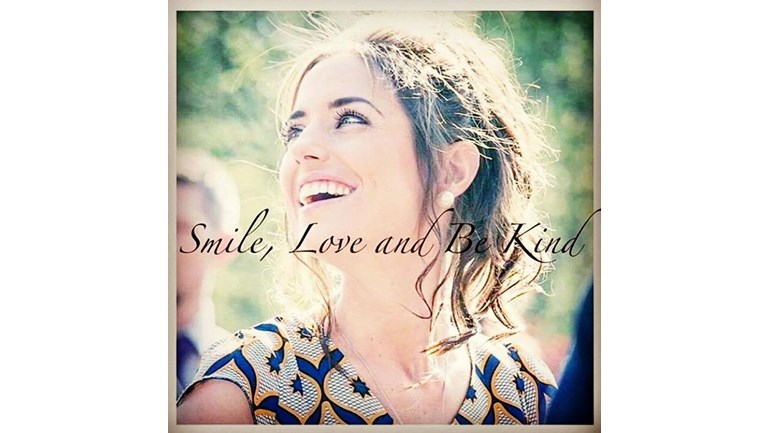 Lovingly remembering the beautiful Emmy Coates for The Royal Marsden Cancer Charity because because they give hope in the darkest times.

Thank you for taking the time to visit the Emmy ‘Smile, love & be kind’ JustGiving page (formally EJTandemonium)

In March 2016 my beautiful wife Emmy Coates was diagnosed with an incurable and rare form of thyroid cancer. As a complex case her care was immediately transferred to The Royal Marsden Hospital in Surrey, England.

We were so blown away by the staff and the quality of care that she received that Emmy immediately wanted to give something back by fundraising for The Royal Marsden Hospital Charity and in so doing, shining a light on and raising awareness for symptoms of rare cancers in young people.

We began raising money by cycling 2000kms on a tandem bicycle across Europe from London to Copenhagen in June 2016 in an event we called ‘EJTandemonium’ (see our blog at www.mollivers.com or search ejtandemonium on facebook). It was a fantastic adventure and by the time we had returned to the UK a month later we were more than half way to reaching our £100,000 target.

Luckily we were not alone though and quite literally thousands of you from family and friends to complete strangers donated and fundraised on our behalf! Marathons were run, cakes were sold, tea-cosies were knitted, charity concerts were held, mountains were climbed… and before we knew it we were flying towards our £100000 target!! (We would never be able to thank you enough…)

Meanwhile, Emmy and I were planning our own next adventure and fundraising plans! As a primary school teacher Emmy always loved a good quality children's book and it was whilst riding on EJTandemonium that she came up with the concept of our bicycle and trailer, nicknamed Tara (after the specialist nurse that was looking after her at The Royal Marsden hospital) and Tyrone, being characters in their own children's story. The idea was that we could produce and sell a book and a percentage of the profits could help us towards our fundraising target. She would write the stories and i would do my best to illustrate her vision. And so the 'Tara and Tyrone' book series was born.

On our return from our EJTandemonium voyage, we began the first book and completed it just in time for Christmas! It was a wonderful success and was very warmly received by all. Emmy and I were over the moon! Emmy loved teaching and she missed her school and the children that she taught so much. She was desperate to continue to have some sort of contact with and influence on young children and the hope was that we could achieve this by producing high quality children's books with a strong moral message, that were entertaining and interesting for the children and parents alike.

Following the success of the first book we decided to set up Mollivers Ltd, an independent children's book publishing business. The hope was that this would allow us to work from home, work the hours we could spare (when we weren't in hospital) and spend the most amount of the short time that we had together. Emmy and I produced two books before she passed away. They were 'Tara and Tyrone - Stuck in The Mud' and 'Tara and Tyrone - Pedro The Pump'. However before she passed away she also wrote the majority of a third book and we had also discussed the concept of a fourth.

Despite thinking that we might live forever and that she might defy the laws of probability Emmy very sadly passed away on 16th June 2017.

Completely distraught and not knowing what to do, I decided to focus on illustrating and finishing the third book 'Tara and Tyrone - Lost at Sea'. Having that focus was this biggest help and comfort to me.

Emmy's motto was 'Smile, Love and Be Kind'. Three simple actions that resonated with more people than we could have ever imagined. As a way of remembering her, spreading this message and continuing her legacy, i decided to launch the 'Smile, Love and Be Kind' range created in her memory and to be sold on the Mollivers website along with the books. Knowing that donations might slowly fade with time, I wanted to make it the ‘Mollivers mission’ to continue to raise money by donating 10% of the sales from anything sold on the website to The Royal Marsden Charity.

Specifically it will be donated to ‘The Emmy Coates - “Smile, love & be kind” fund. The fund was set up by the doctors and nurses at the Royal Marsden who looked after Emmy. They were so taken aback by her indomitable spirit, her unbelievable attitude in the face of such overwhelming odds, and the utterly inspirational effect and beautiful impact that she had on everyone she came into contact with, that they decided to rename the fund (associated with their unit) in honour of her - to celebrate the simply wonderful human being that she was.

The Royal Marsden gave us hope when we had no right to have any. They supported us and gave us both strength in the darkest hours when all we wanted to do was give up. I can’t tell you in words how special they were to Emmy or how much they mean to Emmy’s family and I for all that they have done and continue to do, for us and so many others. Every single person that works there is wonderful and it is an honour to continue to fundraise for them. This fund will support ongoing research in the field of head and neck cancers at the hospital and will forever remain named ‘The Emmy Coates Fund’.

I will always donate to this fund through Mollivers (and this just giving page) and I will always keep The Royal Marsden in the centre of my thoughts for any personal future fundraising that I do. But most of all I will always keep Emmy's motto at the heart of anything that I or Mollivers does. I hope you will all join me in celebrating Emmy in the way that she deserves by continuing to support this wonderful Hospital in all that they do and continue to do everything we can to make Emmy proud.

Thank you in advance for every single penny donated. It absolutely means the world to me (and to everyone that knew Emmy) and will do so much to help those on a similar journey to Emmy.