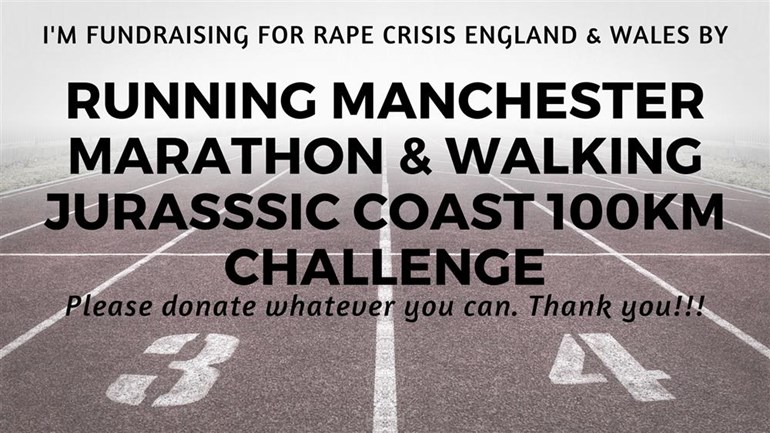 In April I found the courage to do one of the hardest things I've ever done in posting the story of what happened to me in the first year of uni.

Four months on, and I'm so pleased to say that I've decided to walk the Jurassic Coast Challenge, 100km in 2 days, for Rape Crisis England and Wales. Last year, the centres provided over 650,000 sessions for survivors, but this is not enough. Waiting lists are long and the time taken between registering interest and receiving counselling can be long. With the help of donations, the charity can facilitate more sessions to help survivors get the help they need. The counselling I received honestly changed everything for me, and I would like to help by allowing more people to experience it too.

Please donate whatever you can. Thank you!

"As some of you will know, I’ve been toying with the idea of posting this for quite a long time now but it hasn’t seemed quite the right moment to do it. There was the overriding feeling of embarrassment, fear of being judged, and mostly the fact that I was struggling to even admit any of this to myself.

Today is the day I finished a course of counselling from SRASAC and I’ve got to be honest, it didn’t finish on a high. It’s hard to come to terms with the fact that it’s the end of having someone there on a weekly basis, to talk to and have listen to me. But it’s not the end, and my friends have shown me just that.

Almost a year ago, I (in a ‘classic drunk Emily’ moment), remembered something horrific that had happened in first year whilst staying in halls. My sober self couldn’t even remember that it had happened, until the flashbacks started flooding in and I couldn’t force myself to not remember anymore. Admitting what had happened was the worse thing, and it took one of my friends saying it out loud to allow me to accept that it had happened. I had been raped.

Talking to friends about what had happened was one of the hardest things I’ve ever done but it was also what got me through the next few months. Speaking about the things I was experiencing over and over when I was trying to sleep really did help. I had someone to share the burden with. Without you guys, I honestly don’t know what I’d have done.

You were there for me when I was at the lowest of lows. You were understanding and accepted all the shit I did even before any of us knew that this had happened. You made me smile when all I wanted to do was cry.

You might wonder why I’m posting this in such a public place when I could thank friends individually, in private. For me, the embarrassment of everything that happened is the biggest part of this that I needed to overcome. I was so embarrassed, even in front of myself. But, with help, that has changed.

I am not to blame for any of this or the way I reacted after all of this happened. I shouldn’t be embarrassed to stand up and tell people what happened either, because it is that fear that makes rape such a taboo thing to talk about.

Survivors are scared to talk about what happened to them for fear of being judged, or called a liar. Victim-blaming is all to commonplace in our society. I think the only way we can overcome that is by being brave and speaking about what has happened, with no apologies.

I don’t want your sympathy, or to be thought of in a different way. I’m the same person as I always have been. Actually, scrap that. I’m not the same person. I’m stronger than I was before all of this, and posting this is one of the bravest things I’ve done.

To all of you that helped me to get through this, Thank you. Even if it was just understanding. And, as someone told me I was never allowed to say again, I’m not sorry for any of this. I don’t have anything to apologise for."