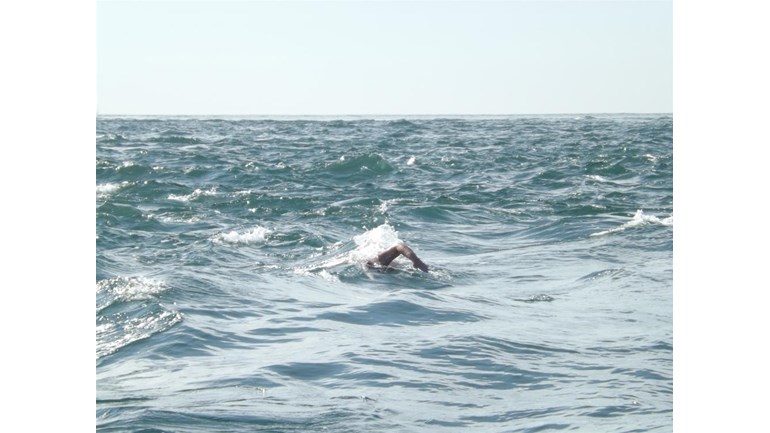 Butterfly Thyroid Cancer Trust is the first registered charity in the UK dedicated solely to the support of people affected by Thyroid Cancer. We offer information,advice and support from fellow patients. BTCT is a multi award winning charity,its founder was awarded the MBE IN 2014.

On 27th September 2009 I swam the channel for the first time.  It was the hardest thing that I had ever done (and that’s still true) and I think I surprised everyone (including myself) by achieving that goal.

Between 2009 and this year my life has changed beyond recognition and I have been diagnosed with and overcome Ovarian cancer; had two lots of major surgery with complications; lost a lot of weight; become single again; and completely rebuilt my swimming stroke.

I had wanted to do another big swim for a couple of years but each time something happened which meant I wasn’t well enough to even start the training.  2014 was the year when this changed!!

On 8th July 2014 I swam the channel for the second time and took 4hrs 39mins off my previous time, becoming only the 146th person to do more than one successful English Channel swim.  7 days later I then successfully swam around Jersey in a time of 11hrs 46mins, becoming the 88th person to complete this swim.  I also defied conventional wisdom that says that you don’t do two marathon swims like this in such a short space of time.  Apart from the 3 person relay that I have booked for September, this was the full list of my challenges for this season.  Going into the year this seemed more than enough!

One question that I have been repeatedly asked since my two marathon swims is ‘what next?’, and because I did the channel swim under a cloak of secrecy no one seems to believe me that there is nothing else planned!  Marathon swimming, apart from being physically very demanding (the training alone is pretty tough with hours upon hours spent both in the pool and in the sea) is a very expensive hobby which I have always self funded.  However, it seems I can resist anything except a challenge (and chocolate) and all these questions of what next have really got me thinking.  I have been fortunate enough to find a sponsor who is prepared to fund another swim this season.  In the air of fun and secrecy I will keep the details of this swim to myself for now, but if I manage to raise £500 for my sponsor’s charity I will reveal more!  Some of you may think you know what I have up my sleeve..... do you?  Perhaps I’ve been bluffing / double bluffing!

The usual caveats will apply with this swim, it is weather dependent and storm Bertha is affecting inshore and off-shore water alike.  As I will be doing this swim as a ‘fit-in’ there is an increased risk that I won’t get to start if existing bookings get pushed back due to weather.  Also, as they say in the world of finances, past performance is no guarantee of future success – just because I have been successful already in the past and in particular this season, that doesn’t mean I will be this time.  There are many factors that can affect performance, from weather, to injury, to my head imploding etc.

Butterfly Thyroid Cancer Trust is the first registered charity in the UK dedicated solely to the support of people affected by Thyroid Cancer. We offer information,advice and support from fellow patients. BTCT is a multi award winning charity,its founder was awarded the MBE IN 2014.