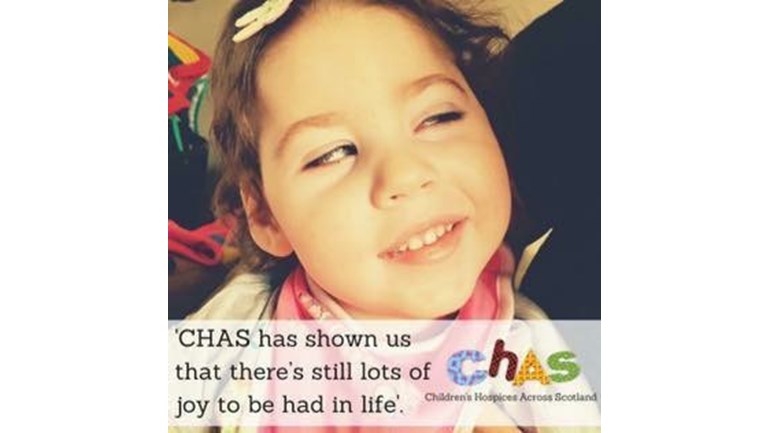 We are fundraising for Children's Hospices Across Scotland, (CHAS) because they are simply amazing 💗

We're Children's Hospices Across Scotland (CHAS). We care for children throughout Scotland with life-shortening conditions and their families. We make sure that no matter how short their time together may be, it is filled with happiness. Even in the pain of grief, we're determined that joy lives on.

Our beautiful daughter, Emmy, was diagnosed in December 2014 at the age of 4 months with a bilateral injury to her brain (this means that both sides were affected) and ruptured brain aneurysm (unknown cause). This left her with various diagnoses including spastic quadriplegic cerebral palsy, microcephaly, epilepsy, cortical visual impairment, and laryngomalacia. Her condition meant that she struggled with almost every aspect of life, including breathing. She was prone to chest infections and became increasingly oxygen dependent. The severity of her brain damage meant that her condition was life-limiting, and she soon required round-the-clock care and support to ensure that her needs were always met and to make her life that little bit easier. We decided early on to care for Emmy at home as often as possible. We didn’t want her to spend her short life in hospital. Emmy would decide when her little body had enough and we would respect that. Her quality of life was always at the forefront of our minds. And it is at the forefront of an amazing organisation who helped us through the most awful time in our lives.

Emmy was referred to Children's Hospices Across Scotland (CHAS) in 2015, fairly soon after her diagnosis, and she was accepted despite none of us really knowing what her prognosis would be. She soon started to go to Robin House for respite, and we would stay there with her too. After spending some time there and feeling so comfortable we soon decided that, when the time came, this would be where we wanted Emmy to spend her final days. Fromm the minute we arrived, any negative preconception of what a hospice might be was blown out of the water. Robin House was a place of fun and laughter. They let us see that there was still joy to be had, and they promoted the importance of our children having the best possible quality of life, even during the most difficult of times. Going there meant that we could enjoy family life without the everyday medical regimes and sleepless nights- they attended to every aspect of Emmy’s medical needs and care when she was there. They were also able to feedback to the NHS staff about her needs because they spent longer periods of time observing Emmy, which is just not always possible during a 20 minute outpatient appointment. But on top of all that they helped us to create memories with our daughter that we will have forever. It’s hard to describe the significance of a place like this using words; it is the most special place we’ve ever known.

On 2nd April 2018, Emmy was due to go to Robin House for a planned respite visit. That weekend she had become very unwell so we called Robin House to ask if she could be seen by one of the wonderful doctors. Emmy slept the whole journey to Balloch. She was seen that afternoon almost as soon as we arrived; we were told that they were very worried for her and, for the first time ever, we were advised not to leave the house. But Emmy, as she often did, rallied and she seemed to improve over the next couple of days. It wasn’t to last, however, and our little girl’s health quickly and rapidly deteriorated- we were then told the devastating news that it looked like she might be nearing the end of her short life. Over the next 5 days Emmy battled like the little warrior she was, and throughout it all she received the most amazing and compassionate medical and nursing input that you could ever wish for. We were also supported immensely by the staff there- the love, care and attention was second to none. Our meals were all prepared, the nurses attended to every aspect of Emmy’s medical needs making her as pain free as possible - all we had to do was to be with her and spend whatever time we had left with her doing what we needed to. We made memories.... we sang to her and read her stories, washed her hair and her little body for the last time, and kissed her and told her how amazing she was. The wider family were all able to come and visit her and they too were supported immensely.

Our beautiful little girl, aged just 3 years and 8 months, took her last breath at 11.20am on 9th April. We had the door open to the garden, so she could feel the breeze, and our amazing nurse turned off her oxygen machine so that we could all hear the sound of the birds. She was in her mummy’s arms where she loved it best, and holding her daddy’s hand. There was the heaviest downpour outside that you could imagine. It was the peaceful ending that we had hoped for her after such a long, hard battle. She was no longer in pain.

The wonderful support after she passed away continued and we all stayed- Emmy too- at Robin House until the day of her service. Being able to spend that time with her was so comforting. There was no rush to say goodbye. We were also guided through every part of the process of arranging what needed for her service, and we were also still allocated a nurse every day who would make sure we were as OK as we could be. If we needed anything, it was attended to- nothing was ever a problem.

On leaving Robin House for the final time, ten days later, the staff had lined up outside to honour and say goodbye to our brave little girl: it was unbelievably touching and this will always be a very precious memory of the most wonderful place. It’s still early days- very raw and we still have a long way to go, we know that- but Robin House is still there for us as a family. We are so grateful for their support now and in the future, and we remain determined to give something back even amidst our grief. This is why we are choosing to fundraise for CHAS.

CHAS rely hugely on charity funding to raise £10 million per year just to run their two Children's Hospices in Scotland. They are currently only reaching 1 in 3 families in Scotland who have a child with a life limiting condition. We agree with them that every family who has a child with a life-limiting condition should have their support. We want to do our bit to say thank you for the love and support they give Emmy, and to us. If we help even one family to receive the care that we did we will have succeeded. We can only do this with the support of our family and friends and we want to say thank you to you all for helping us to help others during the hardest of times 🌈

Emmy's Auntie Carron and her partner Dan are off to take part in CHAS organised Sahara trek later this year... and no double there will be bubble-rushing, kilt-walking, marathon running, and other events along the way.

Past:
Our wonderful friend Pam McClune hosted a cake and coffee fundraiser and she’s arranged a raffle after managing to get some amazing prizes! And the toddler group in Lenzie Parish held a sponsored Toddler Toddle around Lenzie raising an amazing £328- Tilly was last, of course, preferring to stop and beat a stick off of everything along the way! 🌟

In April 2018, Emmy's amazingly impulsive and determined auntie Louise cycled the Hebridean Way - 180 miles- in aid of CHAS. Claire's aunt and her friends successfully completed the kilt walk! Then in May 2018, Emmy's Auntie Laura and cousins Katie and Lucy, and her Auntie Mel, Uncle Gary and cousin Thea, completed the Bubble Rush. Our friend Lesley Kapoor also completed the Stirling half marathon and her work have kindly donated a significant amount of money to CHAS.

On Saturday 22nd October 2017, Claire held a ladies night at the local Scout hall. The prizes that were donated were just amazing, and the Rock'n'Roll bingo went down a storm- £3493 was raised at the night alone and, added to Kenny's run total, meant that Claire won the Mission Impossible prize of a table at next years Fawkes-y Ladies lunch!

On Sunday 1st October 2017 Kenny ran 10k along with friends and work colleagues from Craigmarloch Nurseries in aid of CHAS :)

On Saturday 18th Feb 2017 Emmy's uncle Grant turned 5-0!!! Instead of gifts he has kindly requested donations to CHAS via our fundraising page.

On 29th May 2016 Emmy's Gran, Cathy, ran the Edinburgh Marathon. Then, on 26th June 2016, Emmy's Auntie Carron and Uncle Greg abseiled 165ft from the Iconic Forth Rail Bridge onto the beach below.

We're Children's Hospices Across Scotland (CHAS). We care for children throughout Scotland with life-shortening conditions and their families. We make sure that no matter how short their time together may be, it is filled with happiness. Even in the pain of grief, we're determined that joy lives on.