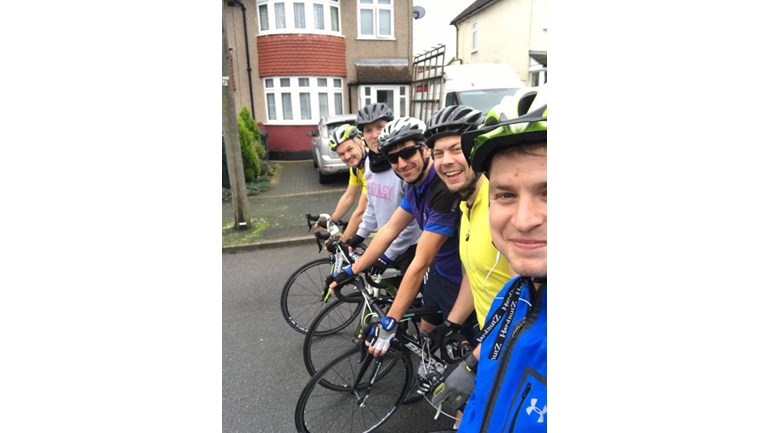 We raise money so that Evelina London Children's Hospital can fund life-saving equipment, life-changing research and provide the little comforts that make hospital less scary for our youngest and most anxious patients. We are part of Guy’s and St Thomas’ NHS foundation trust.

Six guys have decided to take on the pretty epic challenge of cycling from Paris to London, in order to raise money for the children's hospital that saved one of their daughter's lives.

My daughter Isabelle was born in April 2018 with a rare and life-threatening birth defect that no one knew about. During her development in the womb, her oesophagus connected to her trachea instead of to her stomach by mistake. At a day old, she was rushed to the paediatric intensive care unit at Evelina London Children's Hospital, where she had emergency surgery the next day. Six days later she was moved to a ward for two weeks and she was then in and out of hospital off and on for another eight weeks. She has been admitted to hospital a total of 16 times in the last year, and has had to have further surgery to help her with feeding. As a result of her condition, Izzy will require ongoing treatment and more surgery and will therefore remain an Evelina patient until she is 18 years old.

It goes without saying that our story could have had a very different ending if it wasn't for the unbelievable treatment and care that Izzy received at Evelina. Every single member of staff at that hospital is an angel in disguise. Our story is just one of many that happen every single day at Evelina, and every penny that is donated here will help parents and children get through some of their worst days.

It is for this reason, that we will be undertaking the 300 mile journey from the Eiffel Tower to Evelina across four days, between 23rd – 26th August. We have chosen to cycle the longest route and as a result will have to ride on average the equivalent of the distance between Trafalgar Square and central Peterborough every day.

Thank you so much for reading.

We raise money so that Evelina London Children's Hospital can fund life-saving equipment, life-changing research and provide the little comforts that make hospital less scary for our youngest and most anxious patients. We are part of Guy’s and St Thomas’ NHS foundation trust.

Charity Registration No. 1160316
Find out more about charity fundraising