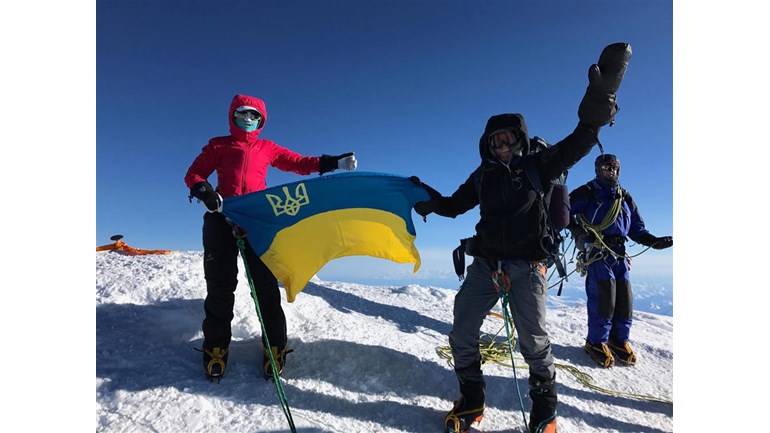 In 2019, Roxanne (Oksana) Litynska and Dennis Ougrin will attempt to summit the fabled Mount Everest, the tallest peak on planet Earth.  If successful, they will be the first Ukrainian married couple to climb the legendary mountain! Ukraine Charity (www.ukrainecharity.org) is proud to get their support and will follow the last few months before the climb is due to take place in the spring of next year.  Please donate generously, commensurate with the challenge, risks and costs Oksana and Dennis are facing!  Let the countdown begin!

We are raising funds to support projects for children in the East of Ukraine, the part of the country which is most affected by the ongoing military conflict.

One of such projects is conceived jointly with www.zhadancharity.org.ua. Children living close to the war zone can feel disenfranchised and alone with countless psychological and physical shocks impacting their wellbeing and future potential.

The project encourages them to write about their experiences and about the books they have read recently and enter into a prize-winning competition judged by the professional writers. It aims at developing youngsters’ critical thinking, forming and conveying their own views alongside developing their literary talents. It encourages the formation of reading clubs and debating societies locally. The winners in each age category will be awarded prizes including a trip to a popular Ukrainian literarure festival. Through the project those young people would feel part of the wider community, gain self-confidence and perhaps find future careers.

﻿Mount Everest, known in Nepali as Sagarmatha (सगरमाथा) and in Tibetan as Chomolungma (ཇོ་མོ་གླང་མ), is Earth's highest mountain above sea level, located in the Mahalangur Himal sub-range of the Himalayas. The international border between Nepal (Province No. 1) and China (Tibet Autonomous Region) runs across its summit point.

Mount Everest attracts many climbers, some of them highly experienced mountaineers. There are two main climbing routes, one approaching the summit from the southeast in Nepal (known as the "standard route") and the other from the north in Tibet. While not posing substantial technical climbing challenges on the standard route, Everest presents dangers such as altitude sickness, weather, and wind, as well as significant hazards from avalanches and the Khumbu Icefall. As of 2017[update], nearly 300 people have died on Everest, many of whose bodies remain on the mountain.

Ukraine Charity supports underprivileged children in Ukraine and undertakes other charitable initiatives in the country. The charity raises funds for orphanage refurbishments, learning programs and summer camps, medical devices for children's hospitals and various other projects.

Charity Registration No. 1163036
Find out more about charity fundraising